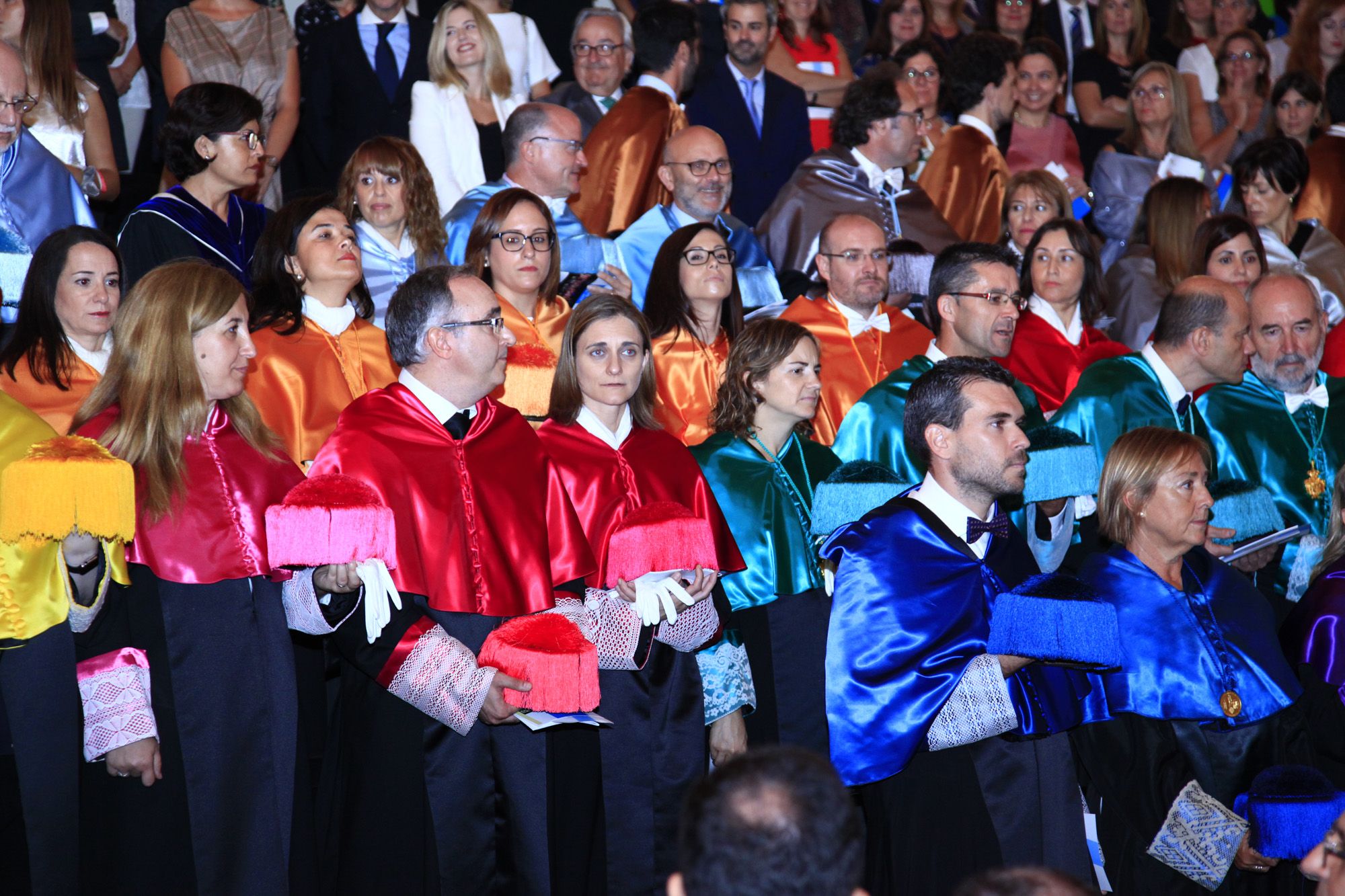 “At CEU we offer our students a space of knowledge from which to learn how to live and how to contribute to human progress and to the improvement of our society.” This was stated by the Rector of University CEU Cardenal Herrera, Rosa Visiedo, at the opening ceremony of the academic year 2017-2018, which was held this morning at the Palau de la Música in Valencia.

The academic event was preceded by a Eucharist officiated by the Cardinal Archbishop of Valencia, Antonio Cañizares. In his homily, the Cardinal recalled the role of the University in the integral education of people, “who must be constructors of a new humanity and be the vehicle of a culture of life, love and peace.” 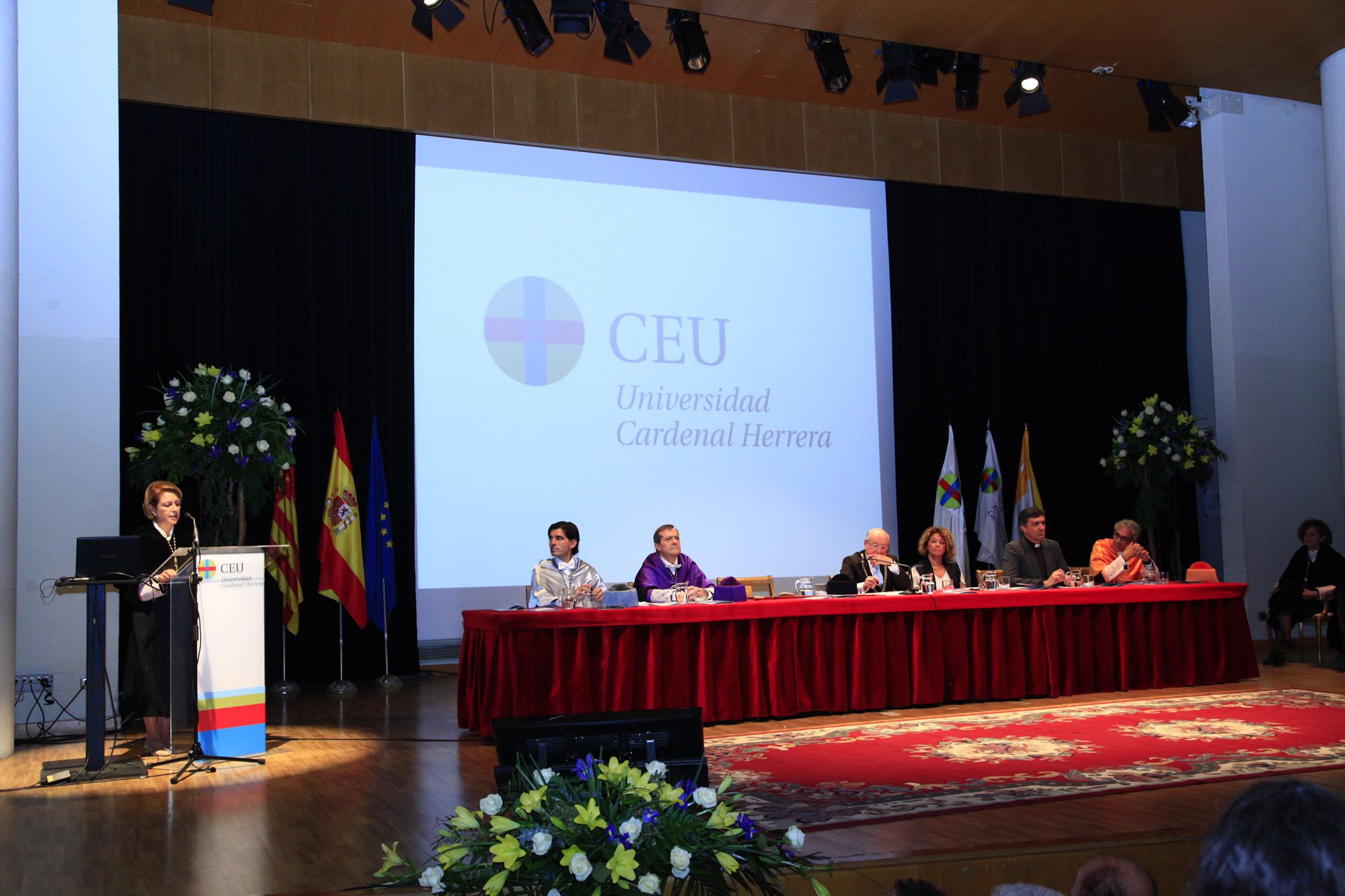 The Great Chancellor of the University and president of the San Pablo-CEU University Foundation, Carlos Romero, presided over the opening of the course with the Rector of University CEU Cardenal Herrera. Josefina Bueno, General Director for Universities, Research and Science of the Valencian Government was accompanying them in the presidential table; the national Vice-Secretary of the Catholic Association of Propagandists, Andrés Ramos; José Manuel Amiguet, Secretary General and Vice Rector of Communication of CEU; the Vice Rector for Academic Affairs of this university, Gerardo Antón; and the author of the Master Lecture, Gonzalo Rubio, professor of the Faculty of Law, Business and Political Sciences of CEU. 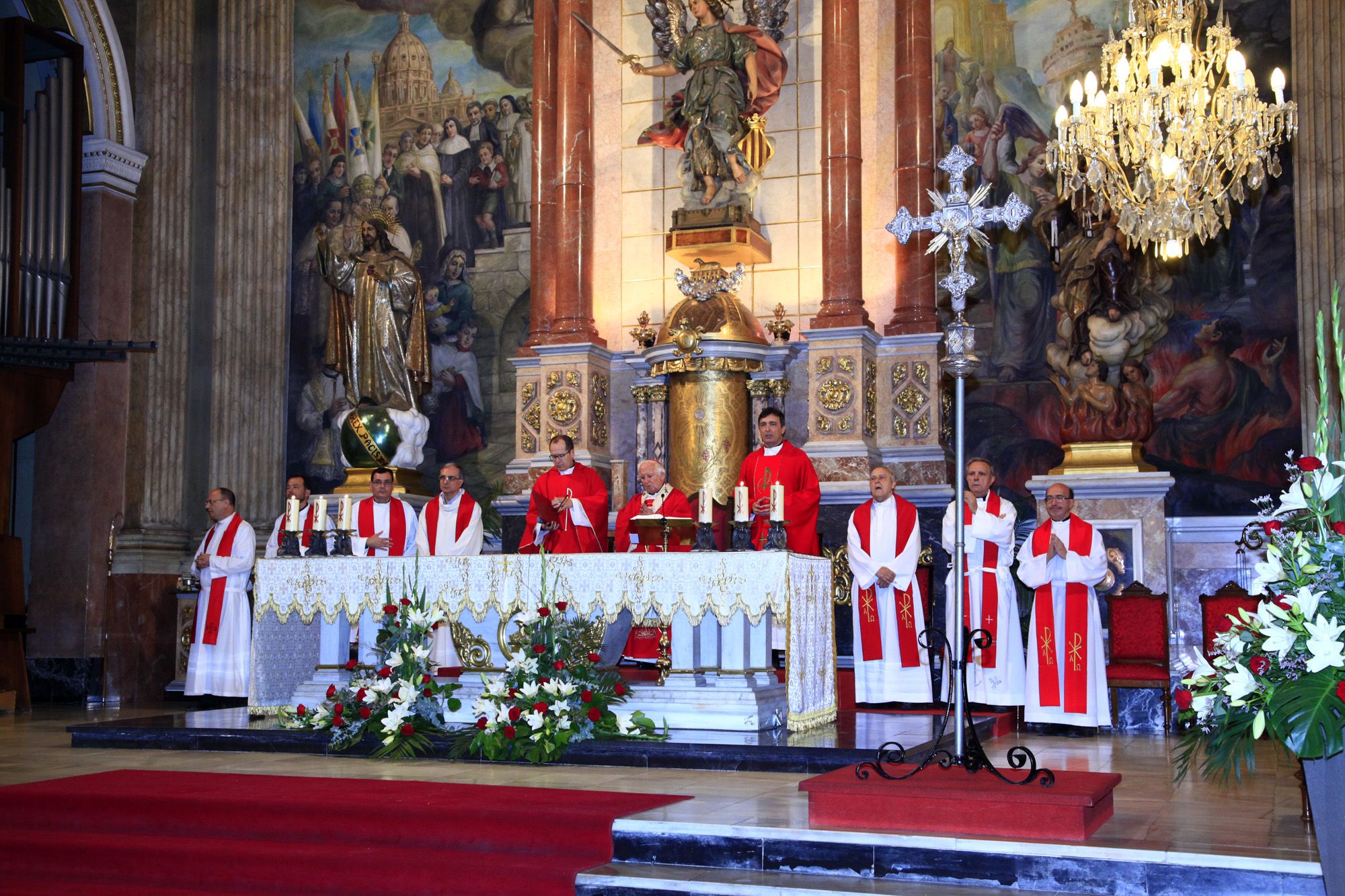 “We already are a truly international university, in which 1 out of 4 undergraduate students comes from another country”, assured Rosa Visiedo. The Rector, who has been very satisfied by the increase in students (16% more in the last four years, with a total of 11,400 students, 2,000 of which are new students), highlighted the upward trend of international students: “In the same period, we have doubled the number of our international students, around 2,300 this course that starts today, coming from more than 70 countries; and of these, 570 are new undergraduates”.

The international vocation of University CEU Cardenal Herrera has also materialized in partnerships with institutions in Europe and the United States, “which will allow us to be part of consortia to present research projects within the Horizon 2020 Program of the European Union and the National Institutes of Health in the United States. We offer our researchers the opportunity to carry out research projects in renowned institutions and, with the Visiting Scholars Program, we intend to consolidate ourselves as a receiving center for relevant researchers in their field”, said Visiedo.

“In this time of change, our time, individuals, institutions, companies and society as a whole, in order to survive, have to learn at least as fast as the environment changes and, in order to progress, do it at a faster pace”, said Rosa Visiedo. And for CEU, she added, “innovating is the light that illuminates this learning process”. 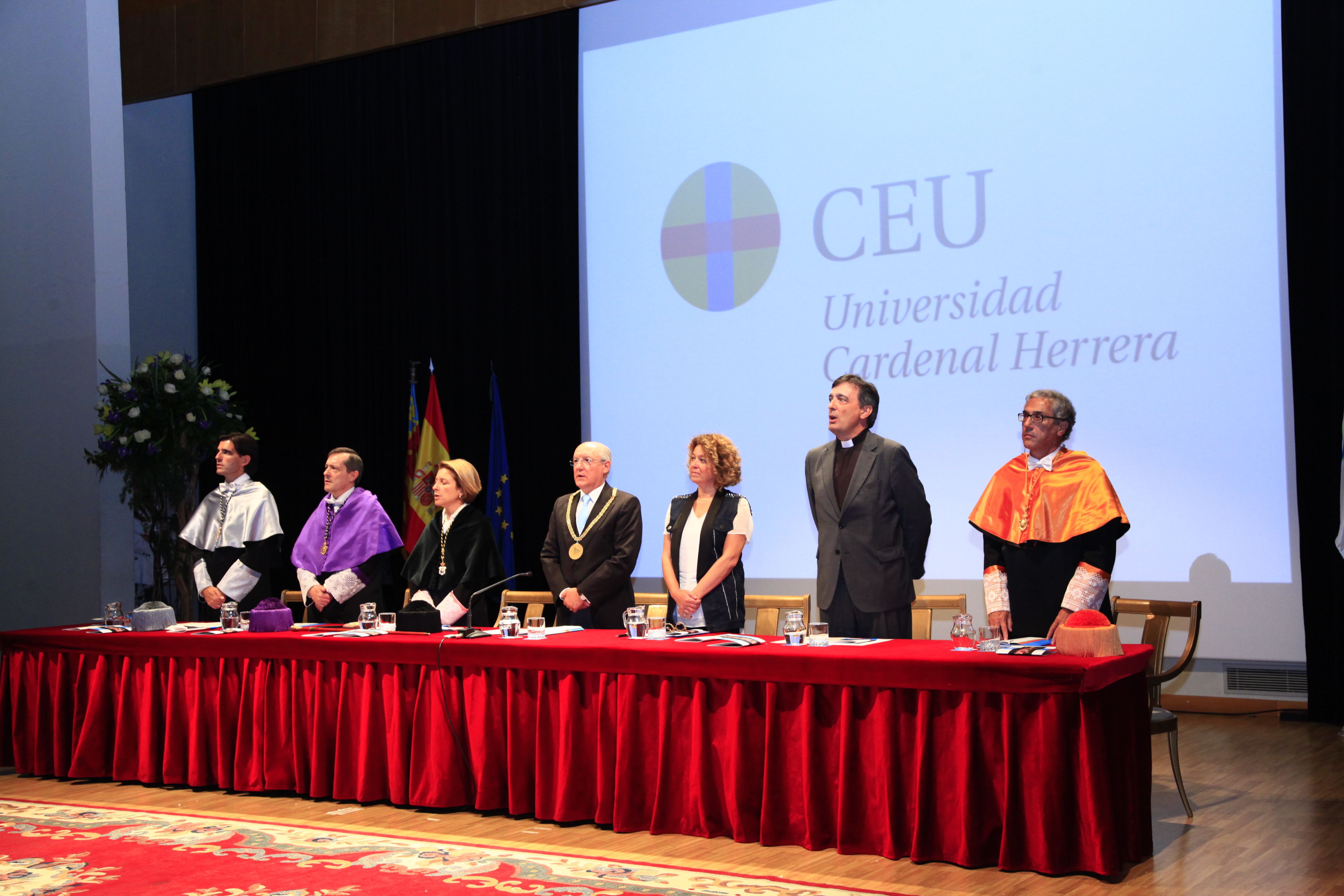 “Today more than ever, said the Rector, it is essential to promote in our students a culture of learning, the passion to learn, based on curiosity, the experience of progress, the feeling of self-efficiency. It is important that they know that they are going to have to be learning their whole lives, not just in the workplace, but personally, emotionally, technically.”

“Doing things differently does not make us less a university, but more”, said the Rector, who also recalled that everything that is done “acquires value insofar as it is translated into proposals for action at the service of society“. 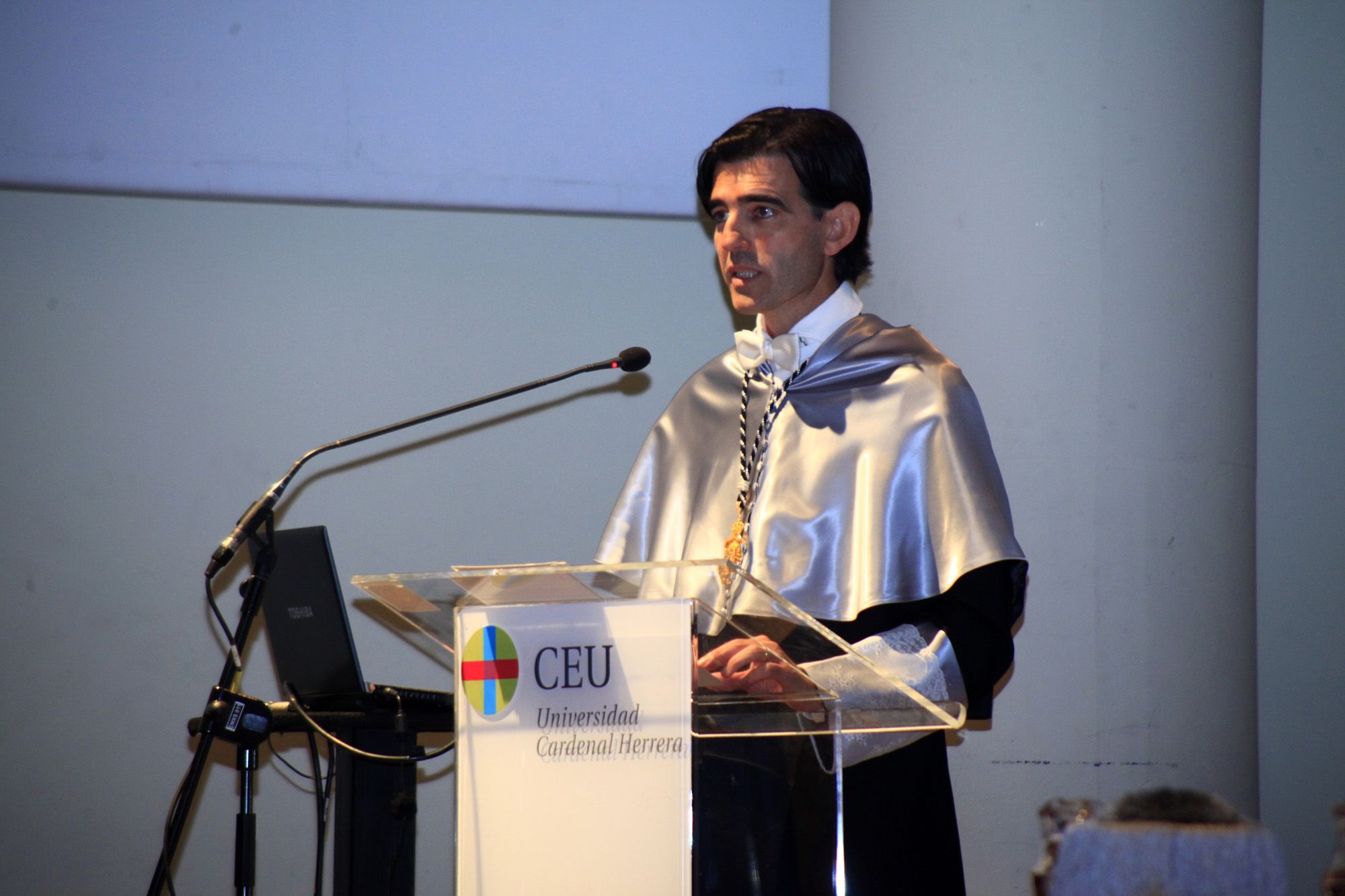 During his speech, the Great Chancellor of University CEU Cardenal Herrera, Carlos Romero, has put in value the achievements of the university during the last year, and has recalled the social character of the Foundation, committed to the society it serves. Finally, he underlined his vocation to “educate people ‘useful for life’, as said by Father Ángel Ayala, founder of the ACdP in 1909, of whom we now celebrate the 150th anniversary of his birth.”

The General Director for Universities of the Valencian Government, Josefina Bueno, has congratulated CEU for the numerous projects undertaken by students and teachers aimed at improving society.

The session began with the reading of the Report of the Academic Year 2016-2017, by the Secretary General of the University, José Manuel Amiguet, who highlighted the commitment of the university to promote talent through investment in scholarships that have been awarded to more than 1,400 students. “Among them, he stated, students with total gratuity thanks to the CEU Merit Program Scholarships. Brilliant young people who do not pay anything to study their entire career in CEU “.

On the other hand, the Opening Lecture, “Macroeconomics, finances and political uncertainty”, has been dictated by Dr. Gonzalo Rubio, professor of the Faculty of Law, Business and Political Sciences. In his speech, the professor has called for the political authorities to be aware of the great impact that financial shocks have on the real economy. 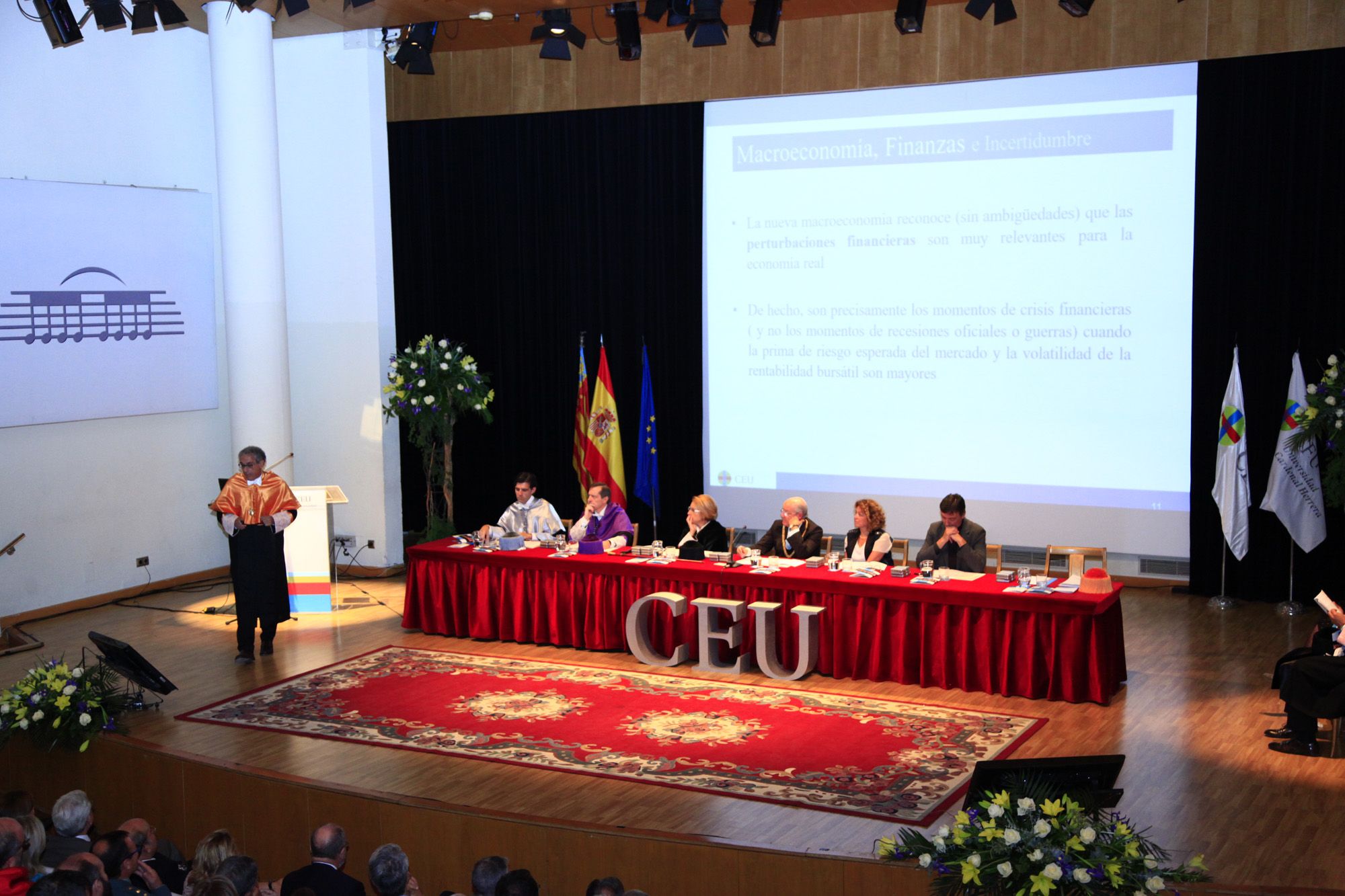 “They should closely monitor the degree of aggregated risk aversion of the economy and not stay away from the relevant implications of the countercyclical behavior of risk aversion. Their actions on the control of uncertainty that affects both the economy and politics would be a step in the right direction”, he said.

During the opening ceremony, the work of members of the university community in several strategic areas of University CEU Cardenal Herrera was also recognized: innovation, solidarity and the dissemination of research and knowledge.

Thus, the annual Awards for Innovation and Improvement in Teaching and Services of the University have distinguished in the category “Teaching Innovation” the Escuela de Salud project, pioneer in the Valencian Community, for its capacity to generate new spaces for learning and practical training of students that combine training in technical skills aimed at improving society through education in health.

The University has also awarded a second prize ex aequo to the projects Keep Knowing: A metaphor for the acquisition and retention of knowledge and Together in excellence: We learn by teaching. With two honorable mentions for projects From the classroom to practice and Building Networks.

In the category of “Best Practices in Services”, University CEU Cardenal Herrera has awarded the ex aequo prize to the Simulaciones Accede project, for its innovation as a proposal and the value potential it can bring to students in their transversal skills training that improve their employability options; and Base Operativa del 360 ​​Academic Program, a cross-cutting initiative involving several services and both teachers and administrative staff. Also, the jury has awarded a mention of honor in services to the project El taller experimental como herramienta para la cumplimentación del apartado Sistemas and Criterios de Evaluación de la Guía Docente.

At the level of solidarity, the university has recognized the work of the numerous international humanitarian missions in which its students participate (Malawi, Philippines, Senegal, Ghana and Nicaragua), as well as social service initiatives within the region, including health and education programs for the elderly, people with disabilities or training initiatives for children belonging to vulnerable groups.

Finally, CEU UCH has also honored the commitment of teachers with the dissemination and access of citizens to science and knowledge.