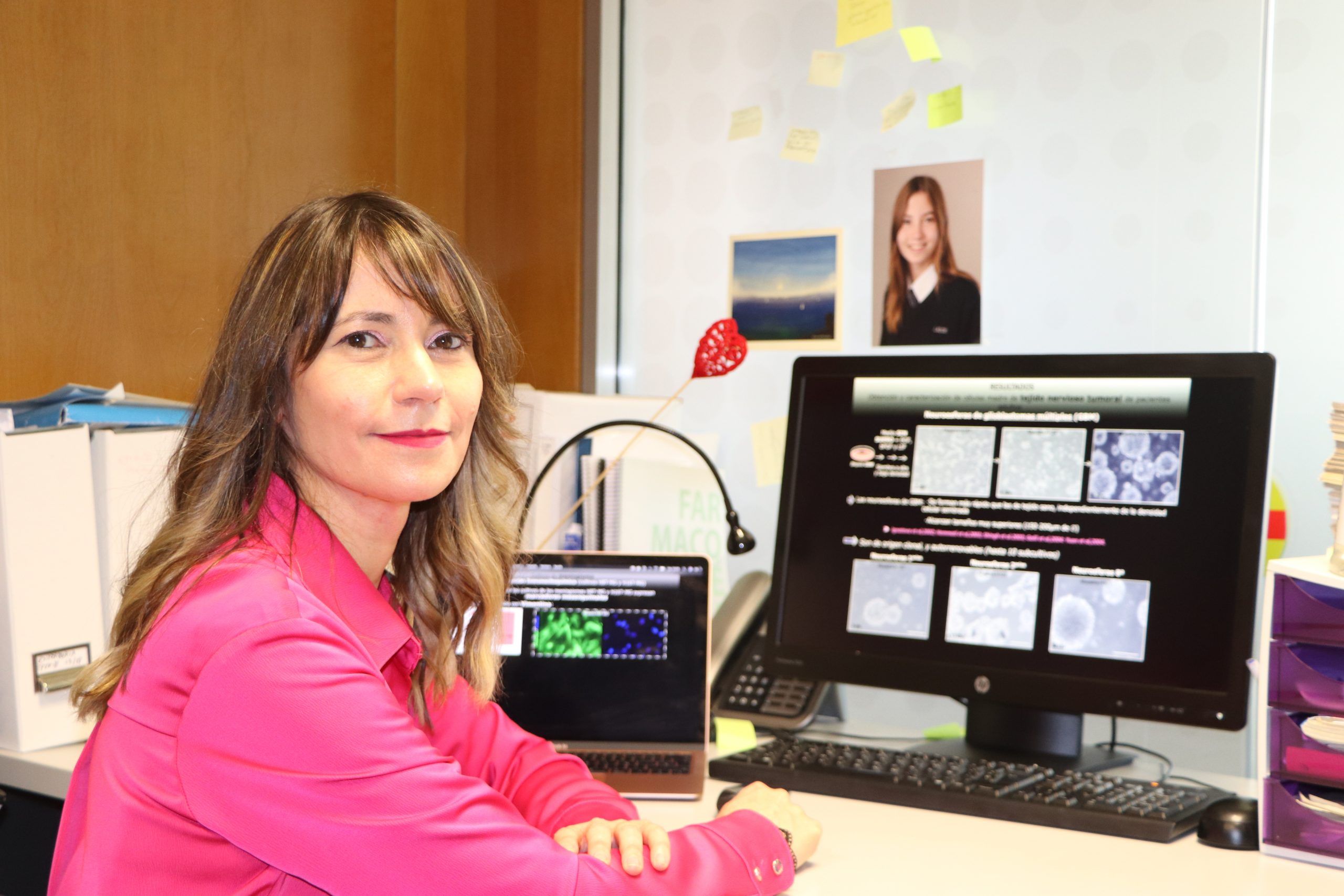 ·     Esther Mancheño Maciá, a CEU UCH researcher based in Elche, is working on the stem cell model, which could change how the origin of cancer is traditionally viewed and generate new areas for cancer treatment research.

Dr Esther Mancheño’s research into cancer has focused on two areas in recent years: Cancer Stem Cells and the drug monitoring of anti-tumour treatments. In the latter case, this forms part of the work of the Clinical Pharmacy and Nutrition Research Group (CEU UCH), led by Dr Vanesa Escudero. For Dr Mancheño, who undertook her doctorate at the Instituto de Neurociencias CSIC-UMH, cancer stem cell (CSC) research opens up new perspectives on the origin of tumours. “The hypothetical model that stem cells form tumours is not yet totally clear – there’s still some controversy. But, if that is true, then that would change the traditional view we have of cancer and it could open up new areas for cancer treatment research,” she told us. It’s important to remember that the discovery of CSCs is relatively recent, being first identified in 1997. CSCs may well be responsible for the initiation, maintenance and expansion of tumours and their resistance to conventional cancer treatment may be behind relapses and metastases. In this interview, Esther gives us some revealing insights into stem cells and the future cancer treatments on the horizon.

With regard to how cancers get started, in what way is this new CSC theory different from the classic view?

For decades, the stochastic or clonal evolution model of cancer has formed the basis of cancer treatment strategies. In this theory, it’s the mature somatic cells, which accumulate at least five genetic mutations over the years, which initiate tumours. However, we know that cancer can occur during the first years of life; that, in adults, most differentiated somatic cells do not divide; and that mutations usually appear as a consequence of cell division. All this seems to undermine the model. And then this theory holds that all the cells in a tumour would have the same potential to generate a new tumour, but recent research has shown that, in order to generate a tumour in immunocompromised mice, you need to transplant at least 10,000 cancer cells.

Unfortunately, what we often see is that a particular treatment for cancer may be initially effective but then we see a relapse and metastasis. The CSC theory suggests that, perhaps in certain tumours, conventional chemotherapy is not able to reach these CSCs. The treatment does kill the differentiated cells or those on the way to differentiating, which make up most of the tumour, but these cannot divide. Some recent research supports this view: it is only when you take CSCs from tumours and transplant them into immunocompromised animals that you get new tumours.

This new view of how cancer starts opens up new areas of research focused on the very heart of tumours, the CSCs. 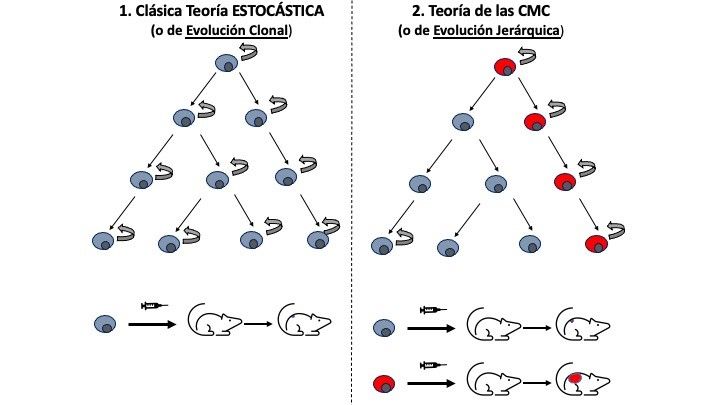 Comparison of the traditional and CSC models

Both types have similar properties. They have the same biomarkers, they share the same active signalling pathways for proliferation and differentiation (Wnt, Notch and Sonic hedgehog) and they can migrate, which would explain how metastasis happens. And just as we can obtain “normal” stems cells in vitro from healthy tissue, we can get CSCs from tumours. Despite these similarities, CSCs are not exactly the same at the genetic level and they proliferate more in vitro. This was something I saw for myself during my doctorate, as I cultivated stem cells in vitro, which originated from brain tumours such as glioblastomas, and compared them with “normal” stem cells taken from the hippocampus of adult patients. The hippocampus, an area of the brain related to memory and learning, possesses neural stem cells which are active throughout our lives.

What is interesting is that both types of stem cell possess certain active cellular mechanisms which enable them to sidestep the effects of radiotherapy, chemotherapy and immunotherapy. They show resistance to electromagnetic and chemical damage, possess systems for the removal of drugs from the active cell, such as ATP-binding cassette (ABC) transporters, and they’re capable of breaking free of the control of the immune system and so of avoiding being destroyed by it. With regard to the latter problem, immunotherapy is an important research area for cancer, currently.

Everyone in the scientific community agrees that it’s crucial to gain a deeper understanding of the real differences between the two types of stem cell, as that will generate targets for the development of new treatments.

In recent years, research has been published which points in the opposite direction and considers the possibility of the dedifferentiation of mature somatic cells. Dedifferentiation is the process by which a differentiated cell reverts to a form seen at an earlier stage of development. In other words, it’s like turning the clock back for development, as every differentiated cell derives from a stem cell, and so this dedifferentiation turns them into stem cells themselves. The work published by the Nobel prize-winning researcher Shinya Yamanaka regarding the in vitro production of induced pluripotent stem cells may support this idea. Yamanaka’s group has been able to produce stem cells in vitro by genetically manipulating mature adult skin cells.

What impact will the new CSC theory have on cancer treatment?  What are the prospects for the future and what new therapies might there be which take advantage of cancer stem cell research?

The discovery of CSCs has drastically changed the outlook for eliminating tumours which are otherwise resistant to treatment. To be able to identify CSCs and target therapy at them is a major challenge and one for which many studies are being carried out, following a range of different strategies.

One focus of attention is on trying to inhibit the capability for self-renewal of CSCs by targeting the active signalling pathways in these cells, such as Notch, Hedgehog and Wnt/β-catenin. So, for example, in neuroblastomas, a type of cancer affecting children which begins in the nervous system, the compounds known as DECA-14 and rapamycin have been used to selectively inhibit CSC self-renewal, with little impact on normal stem-cells.

Another approach concerns inducing the differentiation of the CSCs present in the tumour. Theoretically, if you can transform the CSC into a differentiated cell, it would then lose its ability to self-renew and, overall, the tumour would cease to grow. Examples of differentiation-inducing compounds being trialled are retinoic acid, bone morphogenetic proteins (BMP-4) and sophocarpine, and we’re seeing good results.

Other research groups are working on the systems CSCs have to expel anti-tumoural drugs from the cell, ATP-binding cassette (ABC) transporters. Compounds such as verapamil, cyclosporin A and MS-209 have been tested in this area.

The idea of attacking the niche enabling tumours to develop, by changing the microenvironmental conditions which seem to encourage the transformation of cells into CSCs, is also something that many groups are exploring.

And then, finally, there’s immunotherapy. Much recent cancer research has focused on the role of the immune system in preventing cancer and on the ability of cancerous cells to escape the control of the immune system. Thanks to all the work that has been done, there are some impressive types of immunotherapeutic treatment in clinical use which focus on immune checkpoints, such as CTLA-4 (cytotoxic T-lymphocyte-associated protein 4) and PD-1/PD-L1 (programmed cell death-1 and ligand-1 of programmed cell death-1), for blood cancers and melanomas.

As I said earlier, some CSCs can be resistant to chemo and radiotherapy and also resist immunotherapy because they don’t have certain antigenic proteins, enabling them to avoid cell death provoked by the immune system’s T cells, a type of white blood cell. These CSCs can also release soluble factors which inhibit the activity of the immune system (IL-10, IL-3, TGF-b), protecting their microenvironment from our body’s defence mechanisms.

What other things are the focus of research?

There are some promising studies regarding different immunotherapeutic strategies for CSCs in the tumoural microenvironment. So, there’s work being done on adaptive T-cells (or CAR T-cell therapies), there are vaccines being developed which are based on called dendritic cells, which from part of the immune system, and the use of oncolytic viruses and immune checkpoint inhibitors is also being explored.

In any case, there’s still a long way to go. Many of these treatments affect normal stem cells, so it’s crucial to continue investigating what properties really differentiate these cells from CSCs.

There is something we all agree on. It may be that, in the future, a combination of several of these new types of therapy targeting CSCs may be needed together with more traditional therapies which target the larger tumoural mass. In this way, it may be possible to eliminate tumours of any type.

Where do these CSCs come from?

Here again there is some controversy regarding the origin of CSCs. At first, researchers favoured the idea that CSCs derived from the remaining “normal” stem cells present in tissues. The idea is that these cells maintain a balance between proliferation and the development of tumours. As a consequence of DNA damage, the balance changes in favour of the appearance of tumours. So, for example, it has been reported that neural stem cells (which express the stem cell biomarker nestin) are more susceptible to genetic mutations. 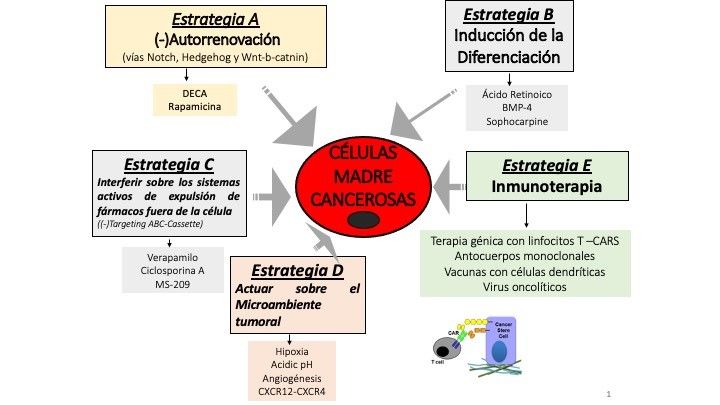 Corporate Reputation: Why it is so important to organisations