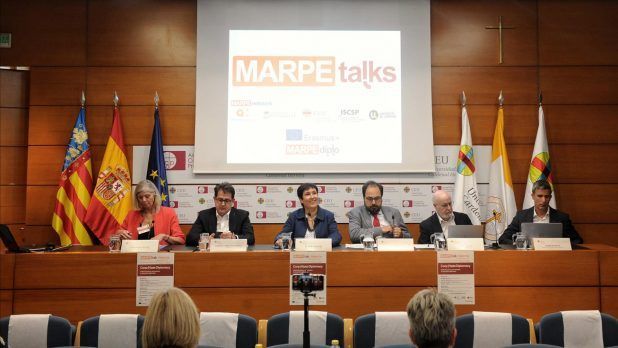 Corporate Reputation and Diplomacy are concepts that are gaining strength in those organisations seeking more meaningful relationships with their external stakeholders. Reputation goes beyond PR, creating real and lasting value for organisations, and fostering stakeholder engagement.

We approached Anne-Marie Cotton, from Arteveldehogeschool and expert in Communication Management, during the last edition of the MARPE Talks hosted by CEU Valencia. With her we talked about Corporate Reputation, its impact in society, and the increasing demand for experts in the field. If you are interested in becoming a Corporate Diplomat, here’s what you need to know!

Anne-Marie, which are the dos and donts of Corporate Reputation, in general terms?

The dos are pretty clear: Define your identity, know what your mission is, be sure that you have a clear vision and, from there on, communicate it. And keep in mind that internal communication is crucial, because everyone within your organisation needs to know your values and understand them, so they will be present in all the actions undertaken by your employees. And it doesn’t matter if you’re a profit or a non-profit organisation, whether you’re government-funded, a stock market firm, a small or large company. You need to know where you want to go and how to achieve your goals, and prove that what you say has a presence in your daily activities.

This is indeed a very long-term dedicated work that has to be led by the top level, from the CEO to all those with an executive role within the organisation. It needs to be explained on a daily basis from the top to the different internal parties and stakeholders. This way they can understand why they are working in that company and what that company wants to achieve. Then, they will act as the first ambassadors of your values.

This is really about the dos. It’s starting from your internal communication and then translating your internal communication into your external communication. You decide on your content, on your channels, and on how you will tell what to whom. But once this message is delivered, as it is all about communication, you need to be prepared for the reaction to your message. So it’s not about pure information anymore, but a two-way communication model in which all the stakeholders have a voice through digital platforms. Today, it is extremely easy to start an exchange with a company and share experiences according to the values they have identified as important.

Corporate Reputation goes much further than just the sustainability of being green, environmentally or politically correct. It is about checking if everything was really done as it was promised, within the values that are defined and determined by the organisation.

Because nobody obliges a company or an organisation to put some values ahead. They decide on their values themselves. And this means that, if they identify their core values and decide to put them in the forefront, they will have to make them happen. And that is what we talk about in our MARPE Diplo Talks: Corporate Reputation is not something that you can get or pay for, but something you need to earn and prove everyday. Prove that you do things correctly and according to the values that you are putting ahead.

I would say that these are the real dos. And the don’ts would be just doing the opposite, as if the organisation said “Listen to my words but please don’t look at my acts“. To build a reputation day by day, you have to live the values that you’re putting ahead, proving that what the organisation promises is really what it is doing.

An intensive learning experience in Ghent

Would you encourage students in the field of Communication to look into the world of public diplomacy, do you see the demand of these positions growing in the next years?

It would be strange not to say yes because at MARPE we are so motivated in the development of our new project! The objective is to build together the content of the Intensive Study Program that we will host from October 28th to November 9th in Ghent. Working together with our external speakers, academics and students I would tell you that yes, I am convinced that there is an urgent need for professionals in Public, Corporate and Civic Diplomacy. And it has never moved and evolved so quickly!

“Reputation is not something that you can get or pay for, but something you need to earn and prove everyday.”

We need to be critical to information, we have to understand the information and how it was built: Who created this information? Which was the purpose of it? Is it a good information? Is it truthful or fake? Only by processing all these layers we can create our own knowledge. And again, future business and communication leaders will create their knowledge differently, but in a way that will make them process true information to make it real knowledge.

I am convinced that the way we are approaching our new MARPE project will be different. We have realized that we can only see part of the knowledge out there, and we are convinced that students who are interested and motivated also have a deep understanding in this emerging part of communications. They can help us find and identify places, organisations and professionals who are dealing with parts of that knowledge, adding them to the practitioners who have another experience in the field.

In the end, it is a matter of bringing together the points of view from three different agents: The academics with their theoretical background, the students with their fresh look on society, and the practitioners with their experience on the field. Together we can create an added value to everything that a person can already learn during his or her traditional academic path.

An overview on Europe’s Corporate Reputation

Talking about the reputation of institutions, how would you diagnose the current state of the European Union’s global reputation?

I can recall a very good book published back in the 90s called “Democratic Deficit”. In Europe we moved from a moment of truly democratic deficit to a very inspired moment in which the idea of the European Union was born. Unfortunately we are now seeing extremism movements popping up, not just in Europe but all over the world, even in countries where there was a real democratic dialogue before.

In fact, there are some very good journalists who reflect on what they gather from the different political sides and who are currently asking the question “Are we witnessing the collapse of the European Union?” I can only say: I hope not.

“Europeans should be aware that together we are stronger and that it is precisely our cultural diversity what makes Europe so rich.”

Let’s not forget that the European Union was created in order to avoid wars like the ones in 1914-18 and then again in 1939-45. Of course, we have never been able to create a real European State but, is this a problem? I don’t think so! This is not the United States of America, where you can find a common ground. Here we are all individual States with our own culture, languages, traditions, and we need to respect that. And this doesn’t mean that we cannot dialogue, on the contrary!

It is the politicians, men and women who are dealing with current politics in Europe, who need to find a way to bring the European people together. Different polls show that never before people were so happy to have a European Union. But at the same time, never before there were so many people saying that they would vote against the European Union, and that they would vote for extremist parties willing to quit the EU. Politicians need to convince citizens of the importance of being part of this European Union, a common market without borders operating on a global scale.

European individuals should be aware that together we are stronger, that we have European values, and that we need to keep our cultural diversity because that is precisely what makes Europe so rich. That makes programs like MARPE also so rich, because they bring people from different cultures together to share knowledge and to discuss topics, each of them from a different perspective.

My perspective on Europe? I can only hope that we will keep this European ideal and we will be able to hand over this heritage that we received after World War II. A heritage built by some visionaries who, one day, said “If we don’t want to have a war in Europe, then we have to create a European Union”.