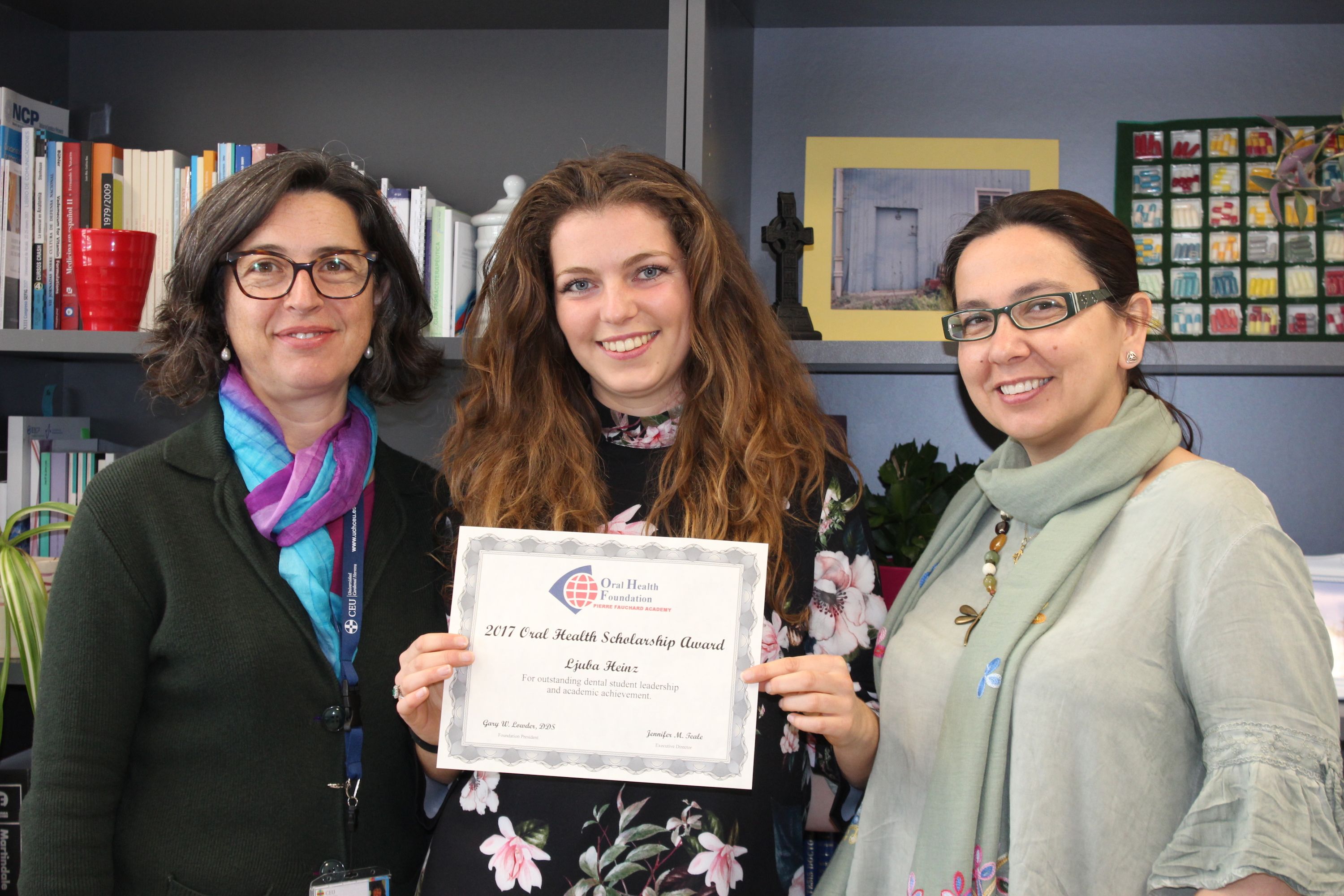 Ljuba Heinz, a student in the third year of the Odontology Bachelor’s Degree at the University CEU Cardenal Herrera, obtained one of the scholarships awarded by the International Foundation Pierre Fauchard to the best academic records of Odontology students from faculties of the whole world. This Foundation, based in the United States, has the main goal of developing Odontology and improving the oral health of the population through knowledge dissemination, research development and professional responsibility as well as talent promotion in this healthcare sector through its scholarships to the best university academic records.

The foundation bears the name of Pierre Fauchard, considered as the father of modern Odontology, author of the first Odontology textbook “Le chirurgien Dentiste”.

The dean of the Health Sciences Faculty, Alicia López and the vice-dean of Odontology, Cristina Ribes, awarded Ljuba Heinz the scholarship and the student highlighted the importance of this prize, “an award that gives me the strength to go ahead and try to do my best in my studies”.

The CEU student pointed out that “making efforts is the key to keep a good academic record. I always try to attend lessons, be attentive and keep the most important ideas because I think that you can learn a lot by listening to teachers”. Other key points according to Ljuba Heinz are: making the most of the internships and revising concepts that you have learned.

“I picked CEU University because I really liked its international profile. I think it is interesting to be surrounded by people from all over the world, speaking different languages and getting to know new cultures. Moreover, I realized that students and professors are very close, you can always go to tutorial classes and especially during the first year each student has a professor guiding them. I also found really interesting that we start making internships from the first year. I am very happy to have decided to study at this University”.

The CEU student praised the work of the Foundation Pierre Fauchard in the dissemination of knowledge, “I have discovered how important this Foundation is in the world. Now from time to time I take a look at their website because there are many interesting publications and articles. The last one I read was very original because it described the medical care on the Titanic”.

Ljuba Heinz got to CEU from Italy, “A few years ago I made a one month internship in a Orthodontics clinic in Italy and it was a unique experience… I saw happiness on people’s faces because many of the clients had almost finished the treatment and they were very happy about the transformation. The dentist showed me some plaster models from before and after the treatment and the difference was incredible.

She remembers that a girl went on the last day of her treatment and when she looked at herself in the mirror smiling, the rest of the team and Ljuba were so happy for her:

“I have often thought about that smile and for that reason I was motivated to study Odontology because I realized how beautiful it is to be a professional that can help others and I believe that seeing people smiling is something really special”.