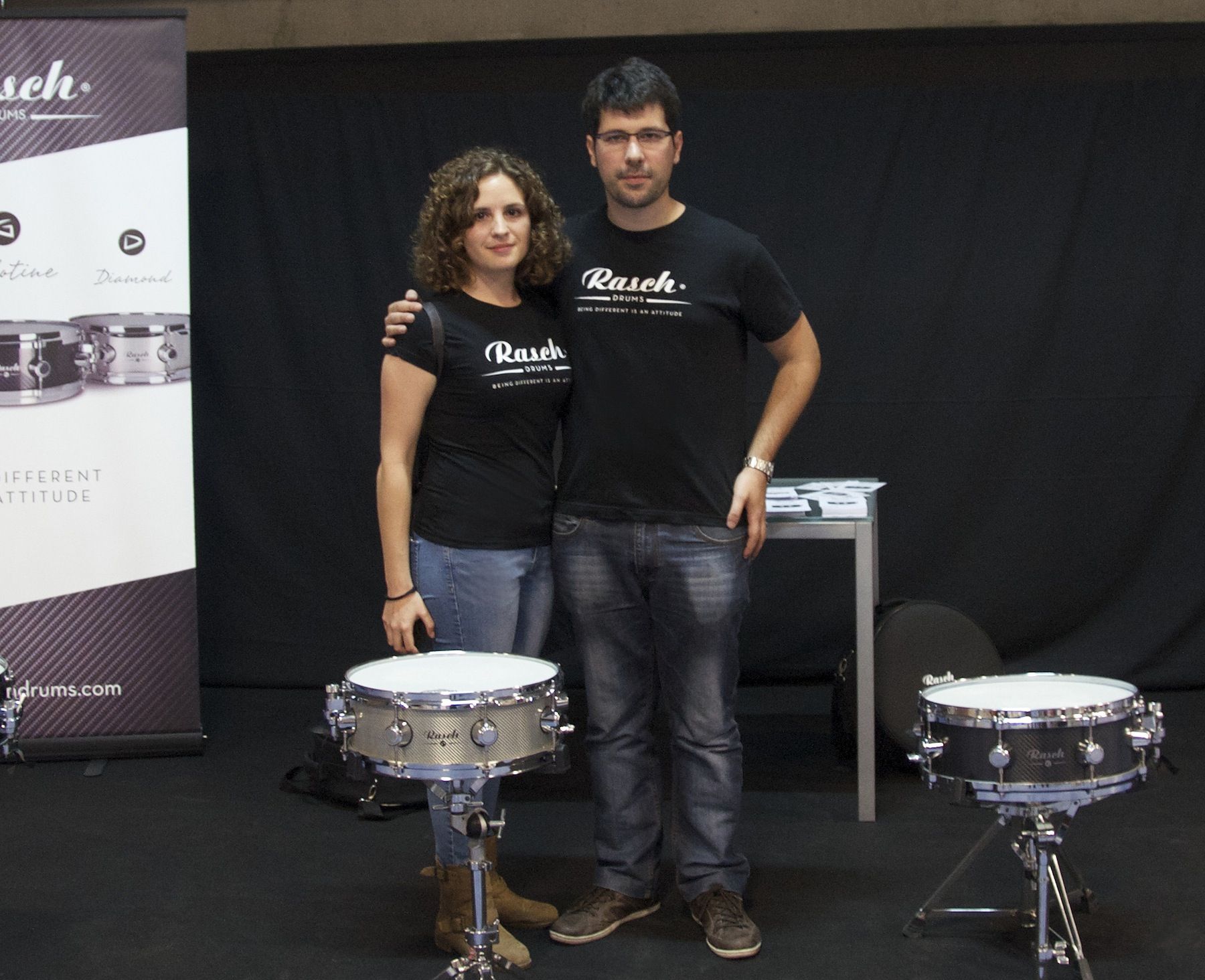 According to the jury at the Snare Drums Olympics 2014, which took place in Nashville, United States of America, Manuel Ibáñez and Patricia Clemente designed the world’s second best snare drum.

The jury of the Nashville Drum Show chose a Spanish snare drum as the world’s second best. The only Spanish entry in this international contest was submitted by Manuel Ibáñez and Patricia Clemente, two doctoral students of Industrial Design Engineering at CEU-UCH Cardenal Herrera University. They developed a snare drum out of aluminium and carbon fibers which they named the ‘Rasch Diamond’, and at the contest in Nashville it was chosen as the second best.

The Snare Drums Olympics, where the world’s best snare drums are awarded, each year take place at the Nashville Drum Show. This event since the nineties is the key meeting for percussionists from around the globe. The snare drum Manuel Ibáñez and Patricia Clemente together developed, called the ‘Rasch Diamond’, received the second prize for its innovative combination of materials.

Manuel Ibáñez, a doctoral student at the Technical School of Engineering (ESET) at CEU-UCH, carries out investigations on the acoustic qualities of composite materials and their applications in musical instruments. “Very little research exists on the real-world influence of the materials snare drums are made of on the vibration of the membranes,” he says.

Ibáñez developed Armonic Range Control (ARC), a system that controls the acoustic capacities of drums through the composition and the characteristics of the materials it is made of. According to Ibañez, “when the membrane of a drum vibrates, it transmits its energy to the walls that support the membrane, as well as to the air inside the instrument.” The drum’s “cylindrical body vibrates harmoniously with the membrane. The opposite effect also occurs: it has been proven that modifications in the cylindrical body of a membrane instrument directly affect the ways the membranes vibrate, and, therefore, the frequencies of the sounds that are produced.”

The combination, proportion, distribution and arrangement of the materials snare drums are made of are important in the sense that the proper configuration of these characteristics allows snare drums to vibrate in a controlled way. “If you can control the way the membranes of a drum vibrate, you can control the sound they produce,” says CEU-UCH doctoral student Ibáñez. “The fact this snare drum features a combination of aluminium fibers with a carbon fiber interior makes it more balanced in terms of stiffness and elasticity.” It was in Nashville that experts from the musical sector gave international recognition to the sound quality obtained with these materials.

Manuel Ibáñez and Patricia Clemente, both doctoral students at CEU-UCH, a year ago out of a love of music decided to apply their findings in the field of acoustic investigation to the development of percussion instruments. In November 2013, after a large process in which they developed prototypes of their drum and professional musicians carried out measurements, studies and tests, they founded Rasch Drums, with the aim of designing a new range of innovative percussion instruments. They apply their investigations in the field of engineering to improve the harmonic quality of the sound their drums produce, and to make the materials they are made of lighter. This makes the instruments more comfortable, helping, for example, marching band musicians in playing them.

They developed three series of snare drums, named ‘Guillotine’, ‘Energy’ and ‘Diamond’. The last of these is the drum that was awarded at the Snare Drums Olympics in Nashville. Some of the most famous Spanish drummers have used their drums, such as Ángel Crespo – who played together with such artists as Miguel Bosé, Ana Belén and Victor Manuel, Antonio Vega, Hevia or Duncan Dhu – and Miguel Lamas – who at the moment accompanies Abraham Mateo on his ‘AM’ tour and who has worked with Raimundo Amador, Miguel Ríos and Carlos Segarra, among others.

Composite materials as an alternative to wood

One of the novelties the Rasch snare drums feature is the IAM (Internal Air Management) system, which improves the projection of vibrations towards the bottom patch, by means of the internal flaps that compress the air in high power impacts. This magnifies the effect of the bas strings.

The most important novelty, however, is the use of technological materials of the latest generation that deform neither over time nor due to moisture. Apart from the fact such deformations in the case of wood do occur, this is also a material that from the moment of its manufacture is susceptible to suffering fractures in its microfibers, which over time cause changes in the sound of the drum. These composite materials are both more resistant and lighter: the snare drums Ibáñez and Clemente developed weigh more or less 300 grams and can resist a pressure of up to 150 kilograms.

More information on the investigations carried out by Manuel Ibáñez and Patricia Clemente can be found on the ‘PercuScience’ website.