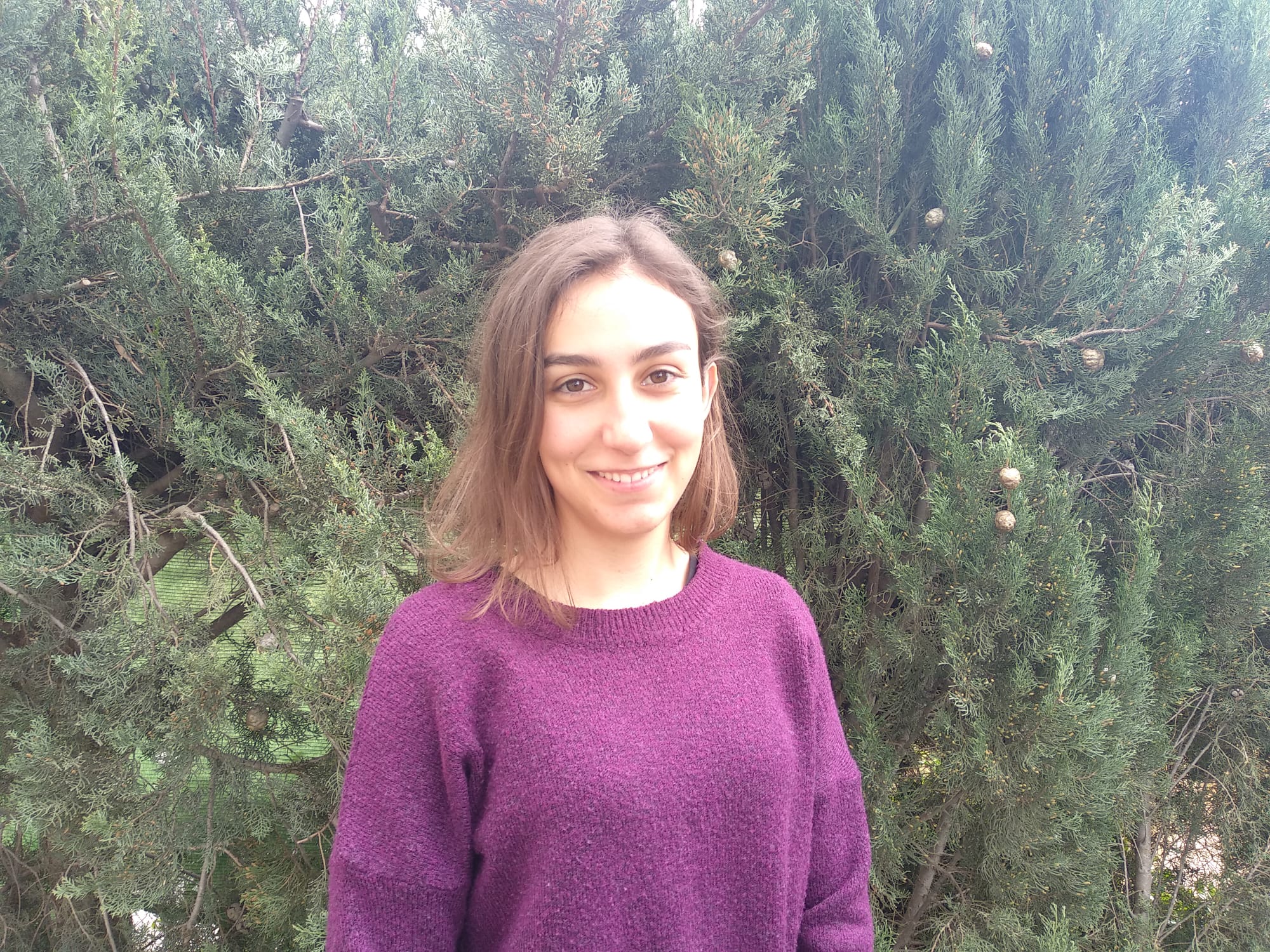 Aída Martínez’s lecturers say that she’s is a role model for what can be achieved by pushing yourself and by showing commitment and passion for what you do. Being proactive is what she’s all about. Inquisitive, shy, cheerful and down-to-earth, she’s waiting to take up a job offer in Germany when she finishes her end-of-degree project. She’s not intimidated by the challenge, even though she knows she only has four months to learn enough German to fulfil her dream: to be a teacher.

The thing is that, before this moment arrived, when Aída had to decide what she was going to study, she wasn’t sure, but her final choice says a lot about her personality and her drive to keep improving. “There were degrees that appealed to me, but, in the end, I went for the Dual Degree in Pre-School and Primary Education. Looking back, the reason why I chose this was that many of the teachers I’d had up to then were more like the opposite of what you want a teacher to be. I’ve always enjoyed learning, even when my school didn’t foster that learning and I had to seek it out for myself.”

Once she took the decision, there were no more doubts and it was then that her desire to become a teacher took hold. “The idea is for the children to see that learning is both useful and a lot of fun, if it’s done in the right way,” she says, after five years on the Dual Degree in Pre-School and Primary Education at CEU’s Elche campus.

The motivation to become a teacher

When I think about why I want to be a teacher, several things come to mind. One is the curiosity that children have about things – things that adults completely take for granted and yet for the children there are so many questions. And, because of that, you as the teacher start thinking about these questions too and you end up learning with the children. Another thing that inspires me is, we might say, their guilelessness. Children don’t put up a pretence, what you see is what you get with them, and they see who the people are who really take care of them and it’s those people who gain their affection.

To give an example, during my placement, it was the children who I had to bring into line more often who were the ones I ended up having the best relationship with. They knew that I wasn’t picking on them by telling them off, but rather that I was doing that because I was looking out for them. People think that children aren’t paying attention to things a lot of time, but that’s not the case. Another reason is that I like to learn and then to teach others what I’ve learnt too.

To be a teacher, in my view, it’s essential for you to enjoy the job in itself, because you’re going to be doing it for life. Also, knowledge changes due to scientific progress and so, if you don’t keep educating yourself, you won’t be able to teach the children effectively.

My placements at the San José de Cluny school in Novelda were the best part of my degree. That’s when you put what you’ve learnt to the test and you see if you really enjoy teaching and if this is what want your career to be. That’s what happened in my case. It’s not that everything went perfectly during the placements, because there are challenges you have to  tackle, things you have to do for the first time, you may be unsure about what to do in certain situations, and so on. But that’s how you learn – that’s what it is all about. Every day in the classroom is different from the previous one.  Even when the children are the same and the subjects are the same, there are always new questions, new explanations, new anecdotes. The truth is that you never get bored.

In the more practical parts of the degree programme, in which we had to plan sessions or create activities to work on specific themes, I discovered that I like research and setting up intervention projects. Although, right now, my plan is to become a teacher in pre-school or primary education, it may be that in the future I go down the research path. Things change and you don’t know the way things may go in a few years. A good example of that is the fact that when I was teenager it was a dream of mine to live and work abroad and now that’s really about to happen.

During my degree, I looked for ways to work as a teacher in other countries. I even thought about doing a master’s degree in teaching Spanish as a foreign language, because there are countries that are looking for people with that background. But, by chance, one day I saw a job offer on the website of the German Ministry of Employment for a pre-school teacher in Germany and I jumped at the chance. I sent my CV in, without much hope to be honest, because I’d just finished my degree and I didn’t have much experience, but I ended up being selected. And so that’s how this adventure begins: without knowing a word of German, I’m going to do a four-month intensive course to get to a B1 level in the language, which is the minimum requirement to be able work in a German nursery school. And after that, in the summer, I’m moving to Germany to be able to do what I love doing, to keep learning the language and to discover a new culture.

It’s great for me to be able to go to Germany to work, because I’ll get the chance to see new teaching methods. The schools there are very different to the ones we have here. The teaching approaches are less strict and are more interactive. The class sizes are smaller, enabling each child to get the attention he or she needs. I think that in Germany I’ll be able to actually do what they always tell us in lectures: “Guide your pupils and support them in the learning process while respecting their individual rhythms and interests.”