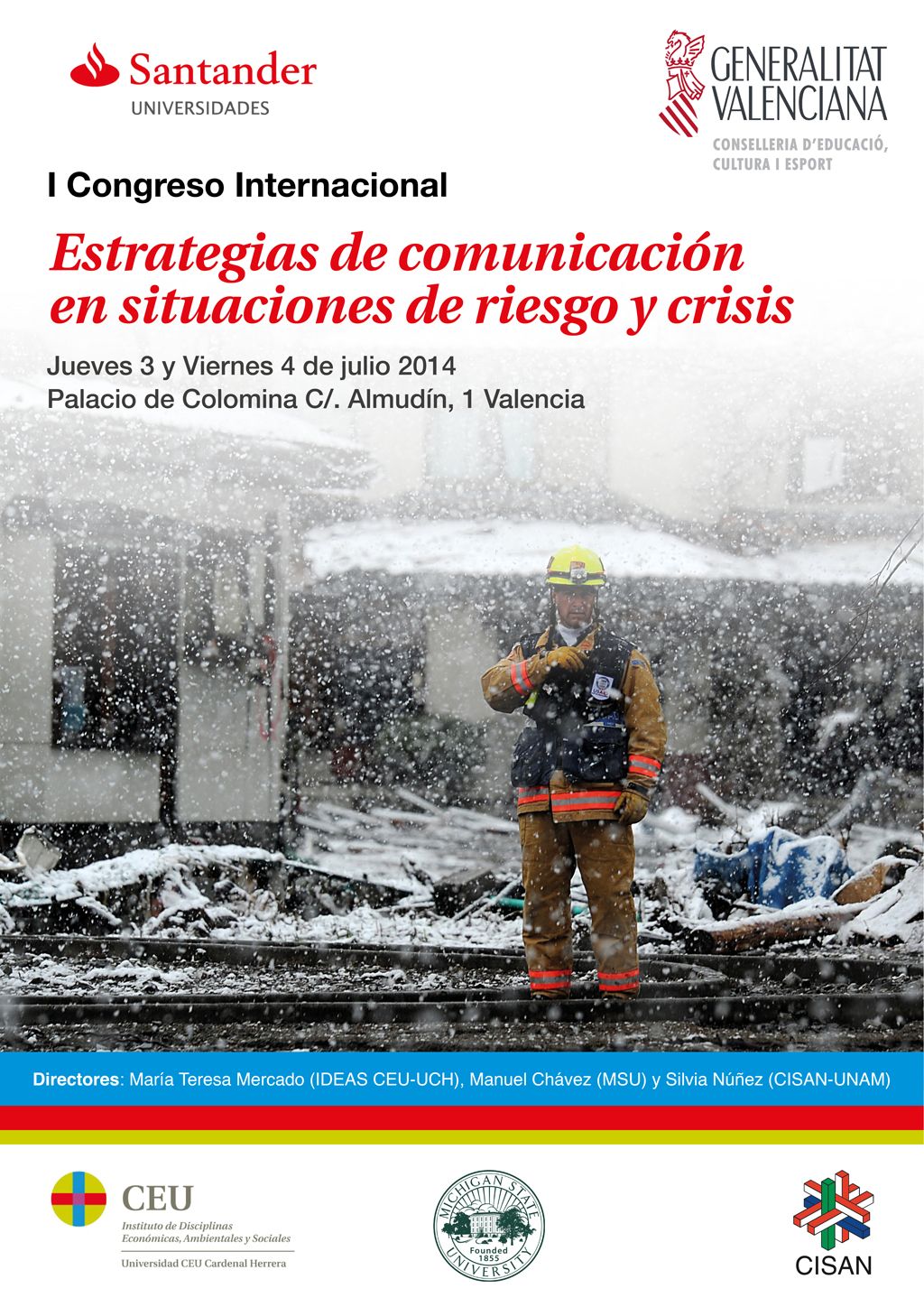 Researchers from the University of Texas, University of Florida, Frankfurt and Ilmenau Universities in Germany, as well as the Heads of Communication of the Nuclear Forum and the High Readiness Headquarters, will also take part in the Congress

Researchers from CEU Cardenal Herrera University, Michigan State University and the National Autonomous University of Mexico have organized the 1st International Congress on Communication Strategies in Risk and Crisis Situations. Experts from a dozen American and European universities will meet on July 3-4 at the Palace of Colomina, home to CEU-UCH in Valencia, to discuss about the communication strategies and media coverage needed to inform the population about the risks and crisis associated to political, humanitarian, security, defense and environmental issues, especially in what concerns digital communication.

This International Congress has been organized by the Research Group on Journalism and Sustainability “Media & Energy” of CEU Cardenal Herrera University. This group has closely worked with Michigan State University and the National Autonomous University of Mexico in order to celebrate this Congress again in two future occasions: in 2015 in Mexico and in 2016 in the United States.

Researchers from CEU Cardenal Herrera University will make known the results of their research regarding media exposure and the communication carried out by governments in topics related to oil prospecting, nuclear energy or fracking. The group “Media & Energy”, lead by CEU-UCH Professor María Teresa Mercado, is currently developing the research project “Analysis of the information regarding energy policies in Spain, reception processes and participation of social organizations”; a project financed by the National Program for Research, Development and Innovation, supported by the Spanish Ministry of Economy.

Other professionals from the corporate communication sector have also been invited to the Congress, like Lieutenant Colonel Alfredo Campo, Head of the Communications Office at the High Readiness Headquarters (CGTAD) of Bétera; the Head of Communication and Institutional Relations of the Nuclear Forum, Piluca Núñez; and the Head of Online Communications at Llorente&Cuenca, Iván Pino. This team of experts will discuss about institutional communication in situations of risk and its management in the context of digital society.

The Congress will be inaugurated next Thursday, July 3 at 9h30, by the Rector of CEU Cardenal Herrera University Rosa Visiedo, and Felipe Palau, General Manager for Universities, Higher Education and Sciences of the Valencian Government. The closing session, to be held on Friday, July 4 at 17h00, will be presided by the Deputy Mayor for Environment and Sustainablity of Valencia, Maria Àngels Ramón-Llin.

The 1st International Congress on Communication Strategies in Risk and Crisis Situations has been organized by the IDEAS Institute (Institute for Economic, Environmental and Social Disciplines) of CEU Cardenal Herrera University, the College of Communication, Arts and Sciences of Michigan State University (United States) and the Research Centre for North America (CISAN) of the National Autonomous University of Mexico, with the collaboration of the Valencian Regional Ministry of Education, Culture and Sports and the CEU-Banco Santander Program in the framework of the CEU International Doctorate School (CEINDO).