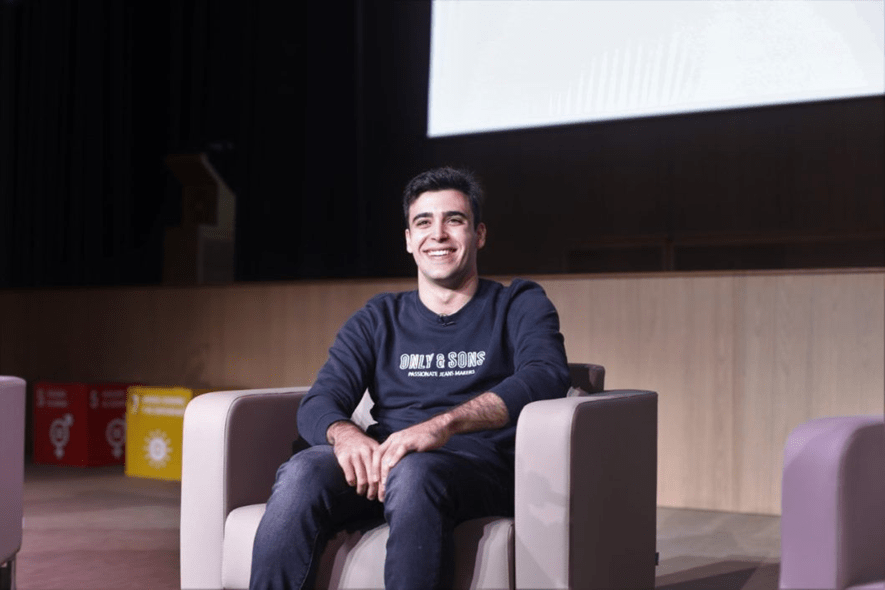 Ignacio Maestro, a fourth year student on the Dual Degree in Primary Education and Early Years Education, has helped to organize a conference open to students across the University. Why? Because of his knowledge and passion for esports.

He told us all about it in this interview.

Ignacio, you’re training to be a teacher, but you’ve also played a key role in organizing a esports conference for students, with the support of CEU staff on the Advertising and Audiovisual Communication degrees. How did that come about?

I find the whole media world appealing. I’ve always enjoyed cinema and TV. So, to be able to learn alongside my fellow students about the connections between the communication and advertising worlds and the up-and-coming industry of esports has not just been an invaluable learning experience for me, but also fits well with the kind of holistic education which is the philosophy behind teacher training for primary school teachers.

So, you’re attracted to the media industry, but you especially like the esports world, right?

Yes, I do. A few days ago, Ibai Llanos and Gerard Piqué presented their new esports team which will compete in the top division of the Spanish video-games league (the LVP’s “League of Legends”). It was crazy because 12,000 tickets sold out in two minutes: I managed to get two and I was there!

I also recently went to Gamergy, one of the highest-profile gaming events in Spain.

Going back to the CEU event, what was your role in that?

I was the producer and presenter, alongside a first-year Advertising and Audiovisual Communication student, Sara Núñez García. She was really good and I think she’ll go a long way.

After an initial meeting with staff from LVP and Deloitte, I took charge of drawing up the programme, preparing questions for each interviewee, the videos, and the music playlist, contacting and supervising the company which set up the gaming area, talking with the technicians to check everything was in order, and then presenting the event to my fellow students, lecturers and guests. To interview them was a great experience.

‘Because this is an up-and-coming industry, the career opportunities for communication and advertising students will grow exponentially’

We don’t doubt it. And from what we’re hearing from lecturers and students, the event was a great success.

Yes. I was very happy with how many people were interested, and their questions and curiosity about the industry. Men, women, hard-core fans and people who didn’t know what any of this was about. And they saw how there are many stakeholders involved in esports, including brands, consultants and other third parties. Without them, there wouldn’t be any competitions.

Do you think a large part of this success can be put down to the attractive career prospects in esports?

Absolutely. Because this is an up-and-coming industry, the career opportunities will grow exponentially. You only have to look at big teams like Vodafone Giants who have 70 staff.

But it’s not only an appealing industry for specialists in communication, advertising or broadcasting. Esports teams also have their own fitness teams, psychologists, nutritionists, coaches, managers… and I could keep going for a while naming all the different jobs available.

If you had to select just one take-home message from all the people who took part in the event, what would it be?

That esports is not a passing fad. The fact that the audience has gone up in 2021 by 40% with 2020, the year of the lockdown, means that a few people have egg on their face now, as they said that this was just a passing craze or just a way to pass the time in lockdown. Esports is a world that is just getting going.

‘Participating in this event has helped me to become more resilient, an essential skill for my development as a teacher and as a person’

Ignacio, what has this meant for your development?

Participating in this event has been the best experience of my life, without doubt. It hasn’t been easy, but it has helped me to become more resilient, an essential skill for my development as a teacher and as a person.

I had an idea of what it would be like, but the truth is that until you get out there on the stage and you’re faced with the LVP’s marketing director, competition director, product marketing manager, innovation lead and a consultant from Deloitte Gaming… well, it’s only then that you really grasp the size of this thing. It’s incredible.

Someone who I have a lot of time for said to me that this has been a turning point for me, personally and professionally. And that’s true. I’ve realized that videogames are not just a hobby for me, but something that I’m really passionate about. This could be my life in the future.

Absolutely. I’d like to thank Sandra Femenía for the trust she placed in me to run this first esports event at the University. I’ve learnt many things thanks to her and I hope to continue to do so.

Thanks so much, Ignacio. Congratulations and keep on striving to reach your goals.