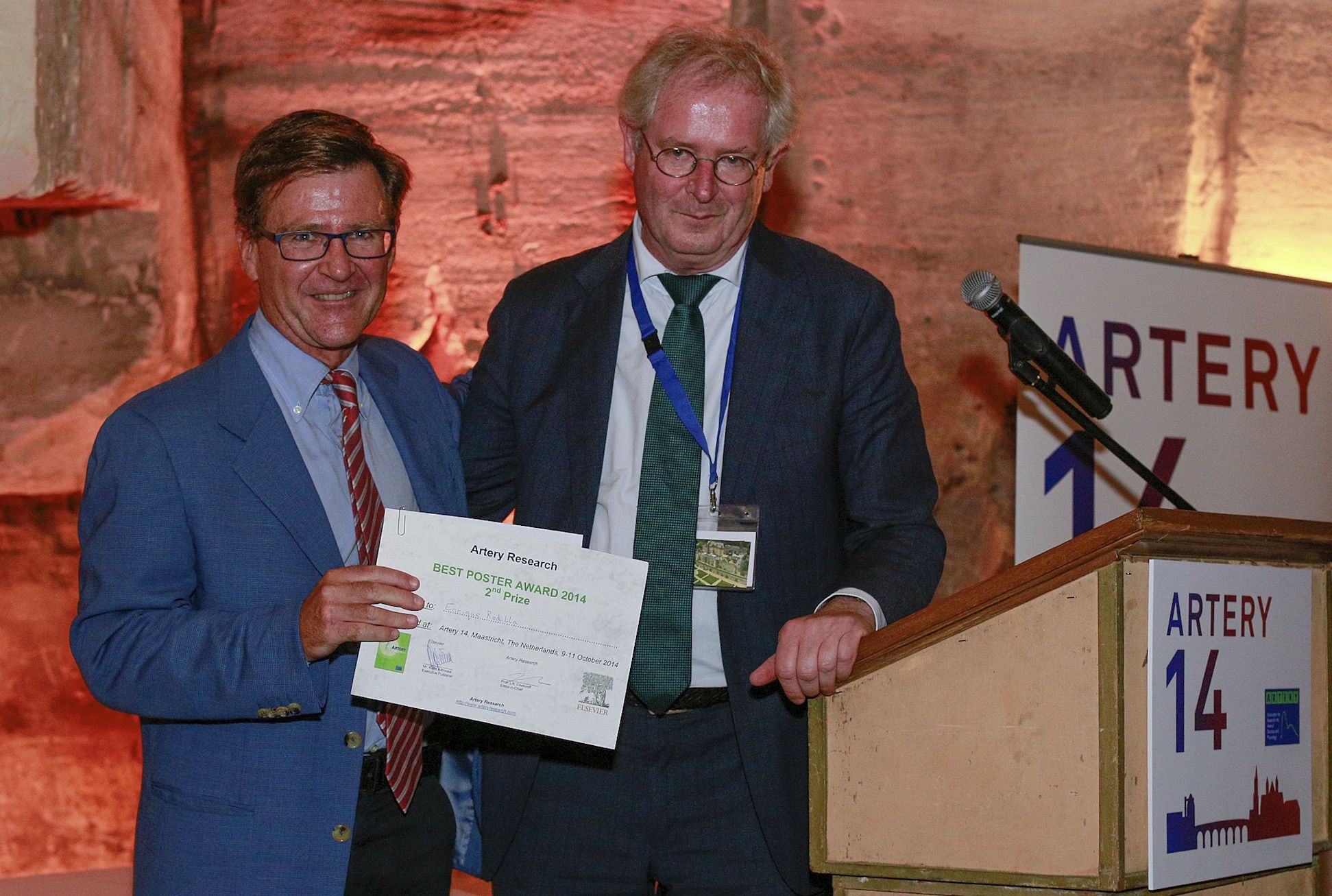 The investigation, led by professor of medicine Enrique Rodilla at the CEU-UCH campus in Elche, was crowned at the Artery Conference 2014, an international congress celebrated in Maastricht

A measurement of arterial stiffness could be the best way of predicting the development of hypertension, the primary risk factor in cardiovascular pathologies, which are the primary cause of death in Spain.

Artery, the Association for Research into Arterial Structure and Physiology, at its last international congress, organized in Maastricht, awarded the investigation led by Enrique Rodilla Sala with the second prize. The stiffness of the arterial wall can be determined through the pulse wave velocity, which can be measured by use of an applanation tonometer. Rodilla, who is a medical professor at the Castellón campus of CEU Cardenal Herrera University, and his team discovered that this stiffness has predictive value for the development of hypertension. This suggests that arterial stiffness, instead of being a consequence of high blood pressure, might be its cause. Stiffness of the arterial walls can, in other words, be the best predictor of this pathology.

According to professor Rodilla, “high blood pressure – more than 140/90 mmHg – is one of the most frequent pathologies in modern society, and it is the most important risk factor of cardiovascular illness, which still is the number one cause of death in Spain. However, in the vast majority of cases the mechanism that causes high blood pressure is unknown.” On the other hand, investigation techniques were developed the last few years that enable measuring the harm associated with high blood pressure, on the level of the vascular as well as cardiac and renal system.

The research was carried out at the Unit of Hypertension and Vascular Risk, which belongs to the Department of Internal Medicine at the Hospital of Sagunto and was conducted by Enrique Rodilla Sala, who is CEU-UCH Professor of Medicine at the Castellón campus. Two students of the fourth year in Medicine at the same campus worked as interns on the project. The Artery jury, which met in Maastricht from October 9 to 11, awarded the research, titled ‘Elevated arterial stiffness precedes development of hypertension in never treated prehypertensive patients’ the second price.

The team led by CEU-UCH Professor in Medicine Enrique Rodilla Sala has a long trajectory in the study of hypertension and target organ damage; in other words, disturbances that occur in various organs when these are chronically affected by hypertension. He recently cooperated with two researchers of the University of Valencia, José María Pascual and Josep Redón, on a report published by the Journal of Hypertension (an international medical journal) in which they investigated how in hypertensive patients the regression of left ventricular hypertrophy, as marker of cardiac damage, is associated with parallel changes in microalbuminuria, a type of kidney damage.

The Unit of Hypertension and Vascular Risk at the Hospital of Sagunto, where professor Rodilla works, convened with CEU-UCH Cardenal Herrera University that students of the Bachelor in Medicine at the campus in Castellón from the fourth year on can do an internship with them. The aim in this is to involve them in clinical investigation, so that they can put the knowledge they acquire in class into practice.