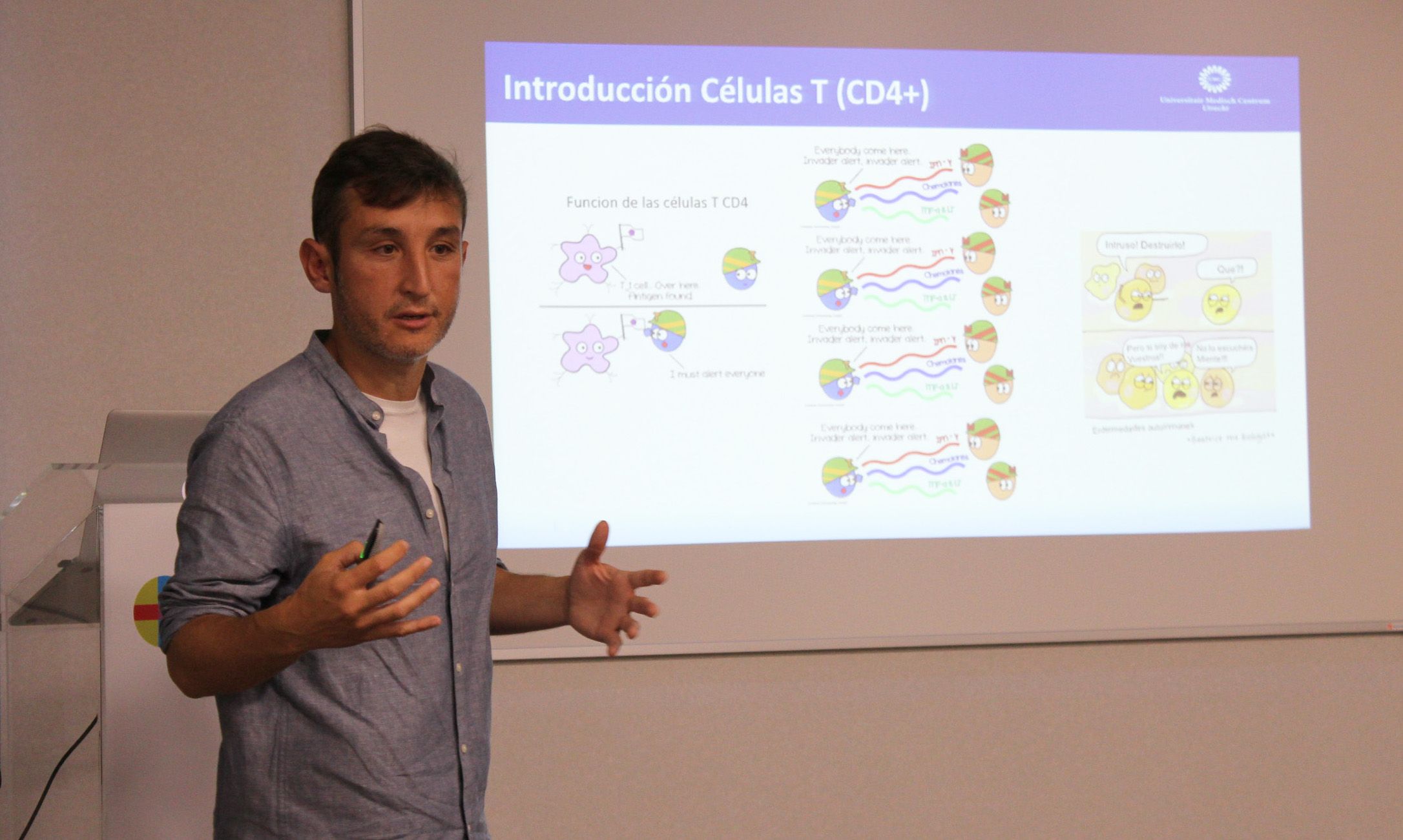 Enric Mocholí Gimeno graduated with a Pharmacy degree from CEU Valencia and completed his doctorate thesis under the supervision of Professor Ignacio Pérez Roger, on the role of the RhoE protein in the development of the central nervous system and cancer. This work took him to America and back again to work with international researchers. His first stop was the Albert Einstein College of Medicine in New York, where he started his studies on autophagy and immune response with Doctor Fernando Macián.

He is now at the University of Utrecht in Holland where he is leading his own line of research in Doctor Paul Coffer’s laboratory. Invited to take part in CEU Descubre, Enric Mocholí, returned to CEU Valencia, to his alma mater, to share the advances that he and his team have made in autophagy and the metabolism of autoimmune diseases. In this interview he tells us the story of his international research journey that he started in the labs at CEU.

You studied Pharmacy at CEU Valencia and decided to do your doctoral thesis under the leadership of your professor, Ignacio Pérez Roger. What motivated you to start a career in research?

When I started my degree I wasn’t very motivated by all the chemistry that we had to study, until I got to second year when we started to study biochemistry and I met Ignacio Pérez Roger (Nacho). Nacho is a different teacher, he doesn’t just have a passion for giving a lecture but also for making you think which is what I really like. I learnt how to motivate myself and I liked it: studying wasn’t hard; I didn’t find it that bad. That’s why I decided to spend the summers working in Nacho’s labs, so that I could learn more and I became more motivated and interested in science.

How do you remember your life as a student and whilst studying for your Doctorate at CEU?

I look back on it with a lot of nostalgia, I had a great time during my degree and I am still friends with a lot of people the only sad thing is that we are now separated by distance. I vividly remember the long corridors of the old Seminari building and trying to sell lottery tickets to be able to go on a grad holiday. It was a great time.

After that, I started doing my thesis in Nacho Pérez Roger’s labs and there I got to know a fantastic group of super motivated and skilled people. In particular I have to mention Enric Poch, who I consider as my second mentor. He taught me how to be organised in the laboratory, as in the beginning, I was a wee bit chaotic. Doing my thesis was one of the best times of my life because you only had to worry that the Western Blot that you were doing would turn out well so that Nacho and Enric wouldn’t tease you. I remember when we all made a giant pineapple together.

During the development of your thesis you spent some time in the Centre for Genomic Regulation in Barcelona where you were part of the group lead by Doctor Mara Dierssen in an investigation on the role of the protein RhoE in neurodevelopment. How was your first experience doing research for CEU outside of the university?

It was a great experience to be able to work with Mara and her research group, one of the best groups for neurodevelopment in Spain and in of the best research centres: the CRG. It was a great personal experience for me leaving Valencia and temporarily moving to Barcelona, I remember cycling across the whole of the city at 3am to do experiments on the neurodevelopment on rats… When I left the laboratory for breakfast I was able to see the sun rise over Barceloneta beach.

Tell us about New York. What it was like at the Albert Einstein College of Medicine and what did you learn during your stay there on a personal and professional level?

When I finished my thesis at CEU, in Nacho Pérez’ laboratory, I was completely convinced that I wanted to continue working in science and one of the privileges in doing that is that you have the possibility of working in fascinating places. New York was on my list and so I took the opportunity to go and work in Fernando Macián’s Laboratory, an excellent immunologist and boss: I have never met as good a boss as Fernando. In his Laboratory I learnt a lot about autophagy and immunology, which is what I had been specialising in for all those years and is what I continue to work in. On the personal side of things it was a fascinating experience: NY is a marvellous city and I made loads of friends, we had I great time and I remember a lot about them all. 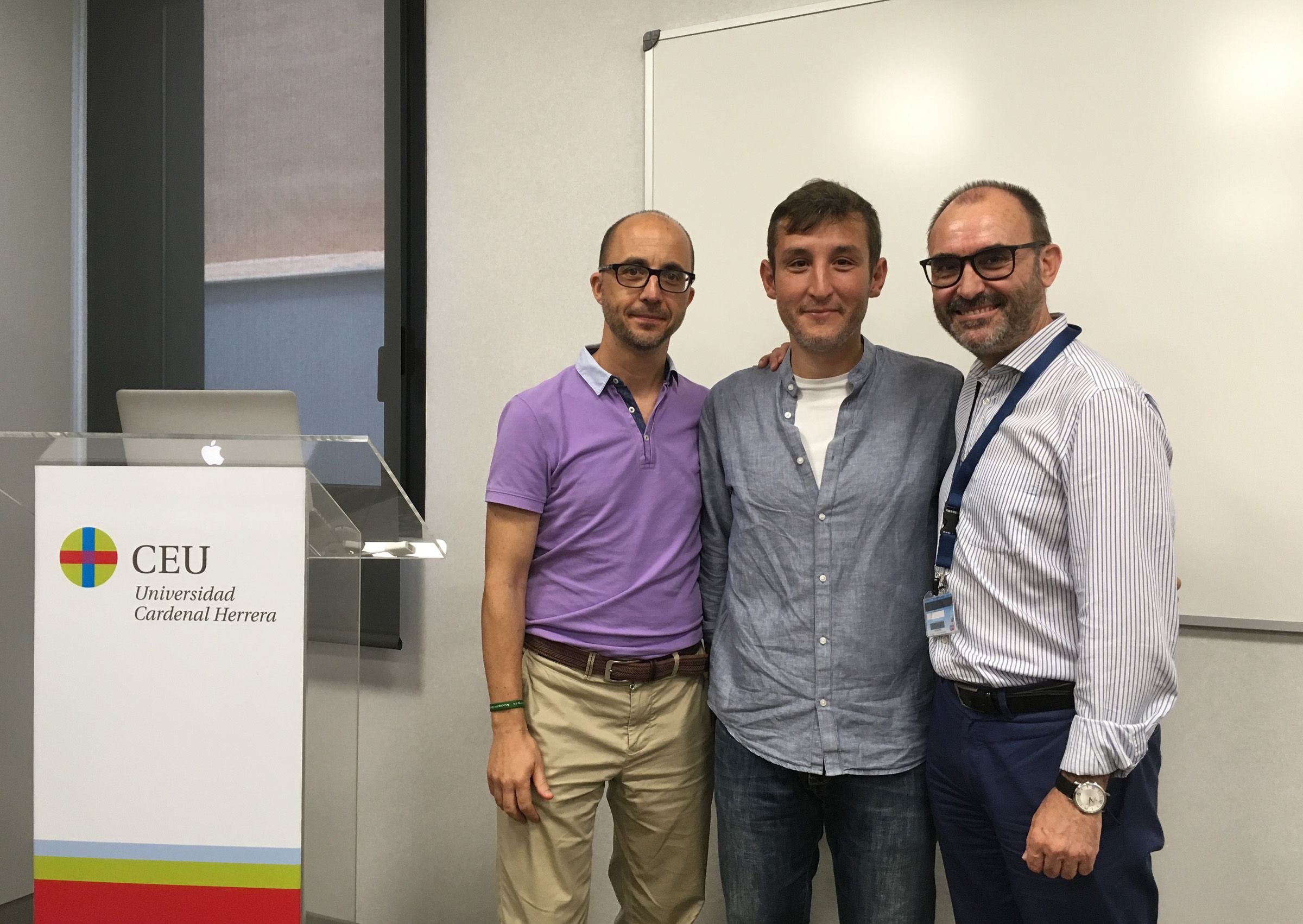 You’ve returned… but to Holland. Why the University of Utrecht and Doctor Paul Coffer’s laboratory?

After 4 years in New York, during which we published various works related to the field; I decided to come back to Europe. It was at this time Spain was in the middle of the crisis and it was difficult to return, that’s why I looked elsewhere in Europe. It was for personal reasons that I first looked into Utrecht and Paul Coffers Laboratory, at the time Paul was interested in studying the metabolism in T cells and I was also interested in T cells and the relation between the metabolism and the autophagy of T cells. I think that it was a great choice because Paul gave me the opportunity to, little by little, start up my own group. By his side I was learning a lot about how to manage a research group, how to design projects and how to present results. As well as this, moving to Utrecht opened up the possibility of working with sample patients and doing more applied science.

In Utrecht you are leading your own line of investigation with discoveries that can be key in the effects of autophagy and the metabolism of T cells in autoimmune diseases. What is the most motivating success and/or most exciting challenge for you and your team?

For me, all of the projects that my group are currently working on are motivating, but if I had to choose one thing it would be autophagy. In the laboratory we have just discovered that autophagy, the cell recycling system, seems to happen differently in T cells than it does with any other cells, it seems a lot more specific in what it destroys and, apparently, this has a huge impact on the function of the cells. The relevancy of this discovery is that, for what we are looking at, this selective autography is altered in T cells of patients with autoimmune diseases. Because of this we are very interested to discover why this system is altered and if this is related to the illnesses that these patients suffer from.

This invitation to the CEU Descubre series has allowed to you to reconnect with your course mates who are also currently working here focusing on autophagy and cancer. What has your trip back to CEU included, reconnecting with them and seeing what they are working on?

For me it was really special to get back with old friends and my two mentors Nacho Pérez and Enric Poch. The truth is that it was amazing to see what they like, what they are doing in the laboratory and if they have had the opportunity to get to know the doctorate students that they are now in charge of. I had time to speak to them about their projects and they seem very interesting, we also talked about collaboration. I was surprised how much they had done considering how little funding there is for research in Spain.

You are a researcher; you are in charge of a group of three researchers… But what is the best thing about scientific work?

The best thing about research is being able to discover something that hasn’t been discovered before, no matter how small or insignificant it is, it is still yours. If you think of it like this it is very motivating. The other side of research that motivates me is when you form a hypothesis, you think about it, you try it, you plan the experiments to prove it, you do the experiments and at the end of a long process…you discover that you were right!

What would you say to a CEU student who is trying to launch a career in research and wants to achieve your successes?

I would tell them to go for it without thinking about it. For me it is the best job in the world, I don’t see it as working but more like a hobby. I would also say that is its hard, it isn’t going to be easy, it’s very competitive…A lot of people will tell you that it is not a real job (this has personally happened to me), you will have to move away to improve as a scientist… it will be worth it, it is very fun!

Thank you for your encouragement Enric! We wish you all the more success!