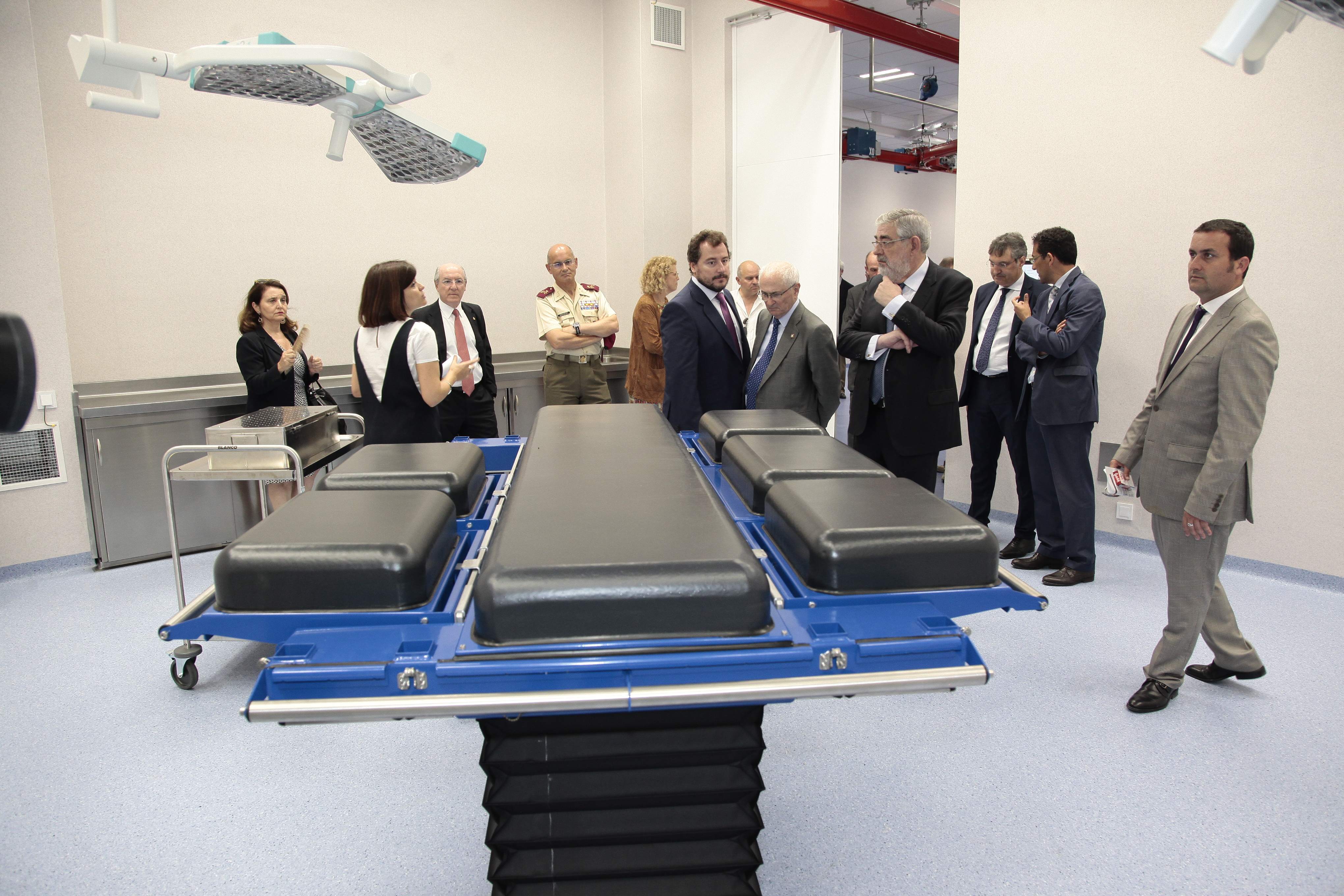 University CEU Cardenal Herrera inaugurated its new Clinical Veterinary Referral Hospital for Pet Animals and Large Animals, on the Alfara del Patriarca Campus (Valencia). The Great Chancellor of the University and president of the San Pablo CEU University Foundation, Carlos Romero, and the Rector of CEU UCH, Rosa Visiedo, have presided the inauguration event of the new hospital, which has included the presence of representatives of social, educational and political life of the Valencian Community, as well as students and professors of the university, members of the San Pablo Foundation and of the Catholic Association of Propagandists.

The Rector, Rosa Visiedo, has emphasised the determination of CEU UCH “to keep working to strengthen a Global Campus in the area of Alfara del Patriarca, adapting to the needs of our university community and with all of the services for our students”. 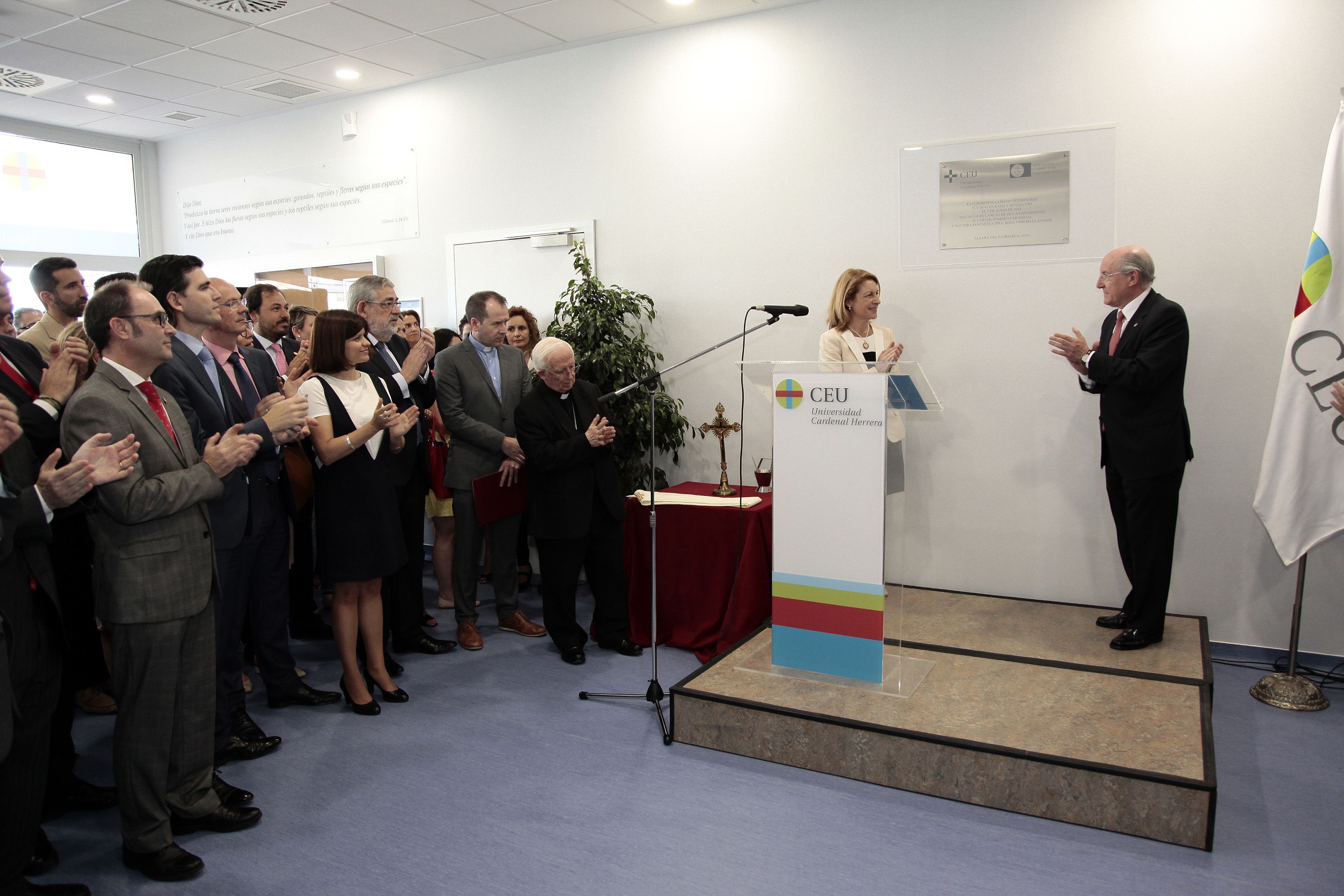 Visiedo has noted that the inauguration of this hospital represents a qualitative and quantitative leap for the Faculty of Veterinary in CEU, which this year celebrates its 20th anniversary. “20 years passed since 1996, when CEU in Valencia was a Pioneer in the establishment of Veterinary studies in the Region of Valencia”, she stated.

The Rector has encouraged all the members of the Faculty of Veterinary to work so this new hospital “becomes a reference from the care point of view, but also a reference in practical training and research”. In this sense, she has noted that the Faculty includes students coming from different countries, and distributed in its three lines of Spanish, French and English, and “this new hospital where they will receive their practical formation is especially for them”. 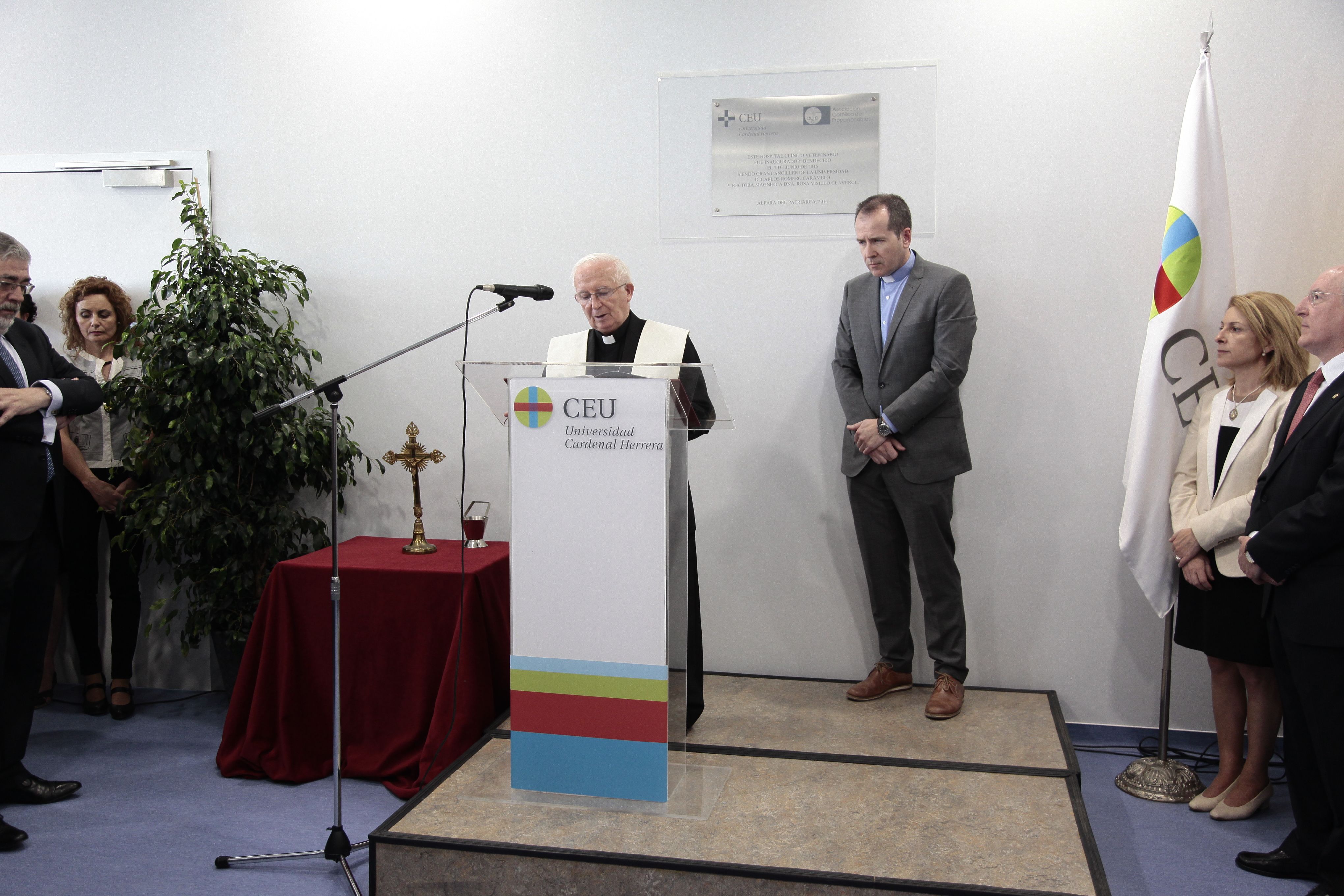 As for the Great Chancellor of the University and president of the San Pablo CEU University Foundation, Carlos Romero has stated that the inauguration of the Clinical Veterinary Referral Hospital is “the realisation of a highly desired dream. Today our Alfara Campus takes another step with this inauguration. This new veterinary hospital started to come together after an academic project that, little by little, was being set up in time, a project that came from the fierce will to position this University as a centre of references in superior teaching, in development and transfer of knowledge. Therefore, we have done everything necessary so our students have access to the best facilities”.

The cardinal archbishop of Valencia, Antonio Cañizares, has blessed the facilities together with the main chaplain of CEU UCH, José Francisco Castelló.

More than 4,500m² and all the areas of specialisation

The new Veterinary Hospital of CEU UCH has a constructed surface area of 4,536 square metres, counting all the areas of specialisation, as well as the suitable spaces for clinical practice and research. A space that is five times the size of the previous facilities, and that incorporates new technologies for safety, treatments for air, waste, and water…and furthermore, the first hospital in Spain with isolation units for infectious animals.

Leading in Image Diagnosis, it incorporates the latest technology in the Hospitalisation Units and ICU, which can be monitored from a central Control unit. 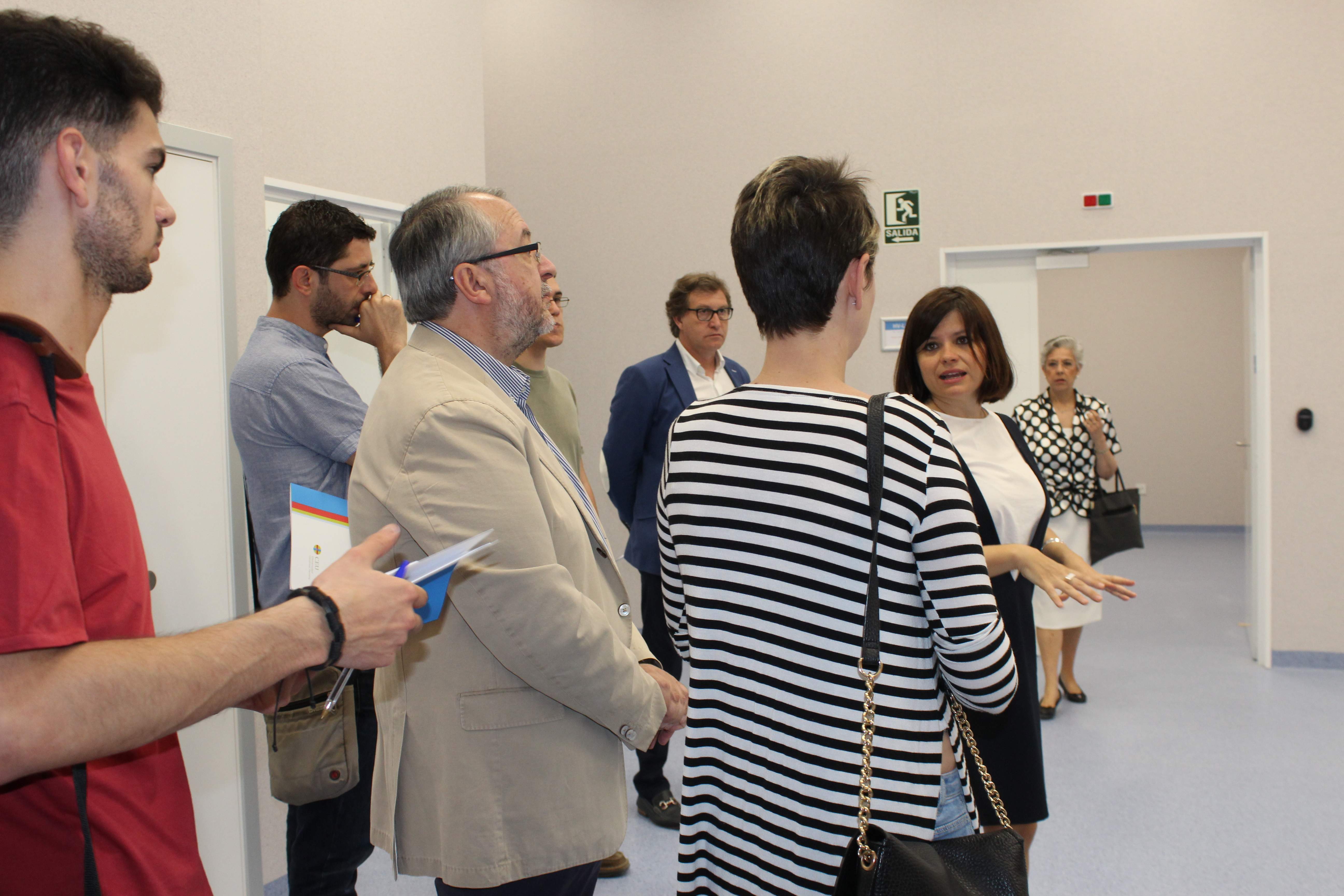 The new Clinical Veterinary Referral Hospital of University CEU Cardenal Herrera also uses audiovisual and computer systems that allow the transmission of operations from the operating theatres, similarly it incorporates a centre of data processing (CPD) that receives, archives and controls all the information of the Hospital and connects the building with the University network in real time.

The new facilities have operating theatres to facilitate the practice of surgery for the students, always under the supervision of professors. As well as incorporating the suitable facilities and equipment to accommodate residents, the Hospital will stay open the 365 days of the year, for 24 hours, just like the previous hospital.

The cost of this new infrastructure and the new equipment amounts to 8 million euros.

In the new Clinical Veterinary Referral Hospital there are four main areas:

In the area of care for Pet Animals, the new hospital of CEU UCH has an examination area that incorporates 7 consulting rooms for different specialities, diagnoses and radiology, 2 operating theatres, three ICU rooms with enclosures for dogs, cats, and exotic animals, as well as a room for control and monitoring the ICUs, general hospitalisation and post-operating, as well as attached interior and exterior spaces (with an area for re-education and socialisation of dogs, and with an open courtyard). This area also includes an independent zone for the hospitalisation of infectious animals, with two enclosures for dogs and cats.

In the Large Animals area there are two rooms for examination and consultation, an examination room with an ultrasound, X-Ray and CT scanner with an area for control of radiology and disclosure, a general hospitalisation and post-operation area with 10 cubicles, 4 ICU cubicles and a unit for infection treatment, with a double chamber and a ventilation system to avoid spreading of infections, as well as the areas of examination and consultation, diagnosis and radiology. The area of Large Animals also has multifunctional area for weighing, treadmill and an area for washing. The infrastructure for transporting animals incorporates a hoist.

The Clinical Veterinary Referral Hospital of CEU UCH has an outdoor open space with a circular hard floor track with a radius of 9m, a circular White floor track with a radius of 9m, a straight hard floor track of 30x2m and a paddocks area (enclosed expansion areas together with the cubicles).
Expert professionals from all of Europe have advised CEU UCH on the design of this Hospital, which fulfils the regulations of the European Association of Establishments for Veterinary Education (EAEVE), the official authority for the certification of the Centres of Veterinary teaching in Europe. 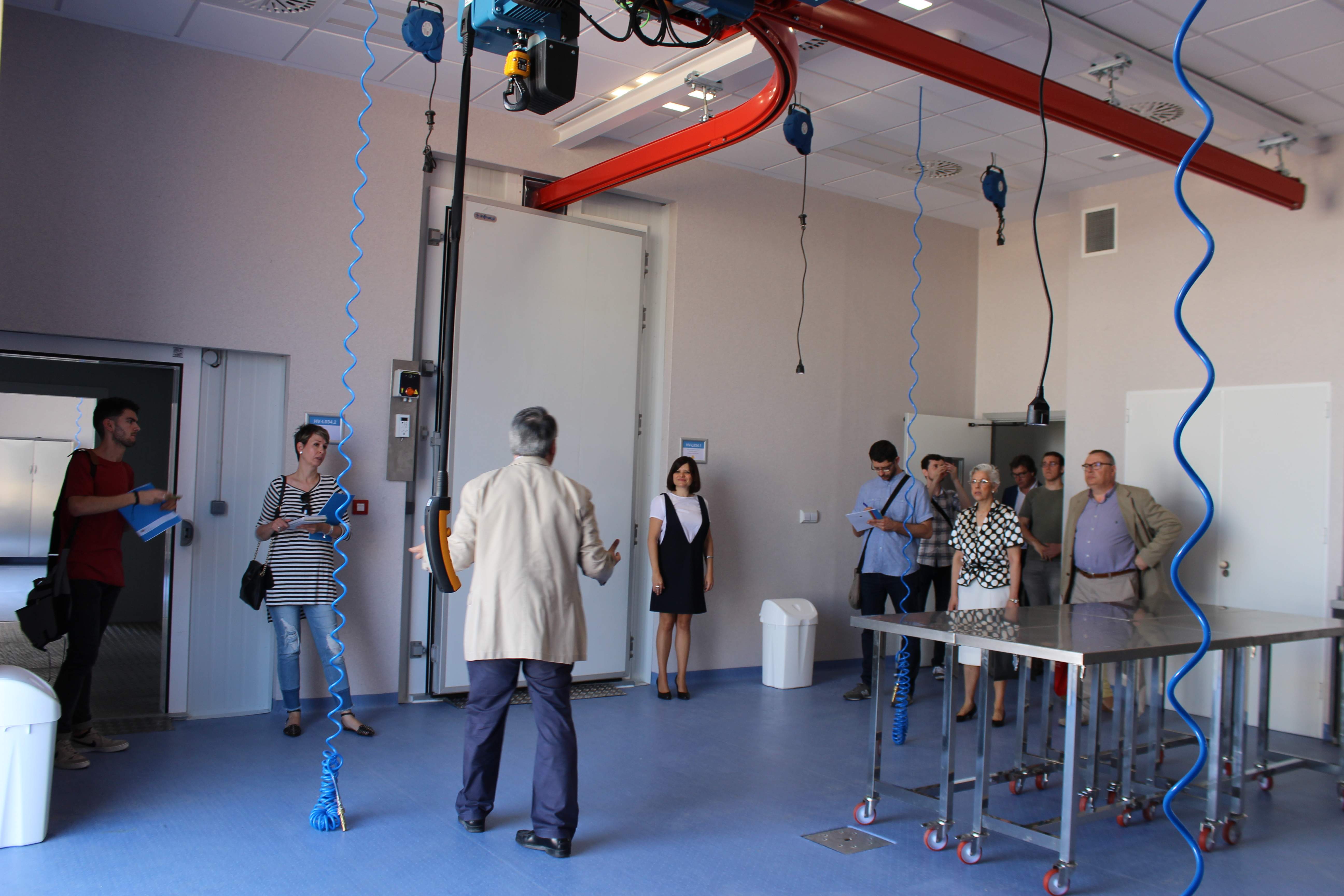 The project was carried out by the SANJOSE Construction Company, which at the moment can also be found finalising the extension of the Faculty of Health Sciences facilities of this University, on the same campus of Alfara del Patriarca (Valencia).